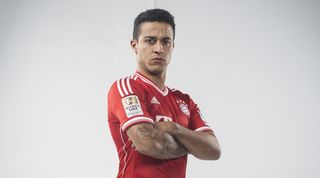 Yet we think you know as well as we do that the best is yet to come from the young star Pep Guardiola and his new club parted €25 million with for his services in the summer. Injury stalled the Spain international's start to life at the Allianz Arena, but as Die Bayern look to land consecutive titles you can bet Thiago will have his say between now and May.

And who better to play under than the man who oversaw his passage to Barcelona's first team at the age of 18? Well, nobody of course, as the Italian-born playmaker told FourFourTwo when we went behind the scenes at Bayern Munich in our latest issue.

You know Pep Guardiola from Barcelona. Is he any different in Munich?

He wants to control the game with Bayern, the same as in Barcelona. He has a definite idea of what his football should look like. One of Guardiola's objectives is creating superiority in numbers. Always having two players against one opponent is what the team strives for.

He's won almost everything there is to win with Barcelona. What do you think his aims are with Bayern?

It's an absolute challenge for him to do something special with Bayern as well. He wants to impart his football. It's supposed to be a balance between attack and defence. It's about dominating the opposition — and playing football of the highest class. In a perfect way, if you will.

Can the success he's had in Barcelona possibly be repeated in Munich?

What has impressed you about the Bundesliga?

The entire league, especially in terms of organisation and precision. I guess that's unique to Germany. And the pace of the attacks - the Germans love counter-attacking. All the teams are dangerous. Just think of Freiburg, where we drew 1-1.

Is Spanish football so much different?

Do you feel part of a special project?

You could say so, yes. It's a good feeling.

Can you, with your experience under Guardiola, help the team make the transition to Pep's style?

I consider myself part of the team and will try to bring in my experience, just like everyone else. The best place for me to do this is midfield, which is where I can decide or influence many things.

How will you cope with the German winter?

What was your impression of Bayern before you came to Germany? How do the people outside of Germany view the club?

The whole world knows Bayern Munich. Every football fan watches the Champions League - and Bayern are a mainstay there. Everybody knows that this is a special club which stands for financial health and football at the highest level. Just look how many fans Bayern have all over the world.

The latest issue of FourFourTwo includes an 18-page Inside Bayern feature. Read all about it...