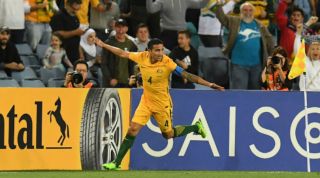 Australian's all-time top-scorer Tim Cahill sparked debate after scoring twice in his country's extra-time victory against Syria, which put the Socceroos one step closer to qualifying for Russia 2018.

Cahill, 37, clinched victory with a headed brace – but after recently signing a sponsorship deal with Australian company TripADeal, chose to supplement his celebration with the company's 'T' gesture (yes, apparently they've commandeered a letter of the alphabet as their own).

The company later took to Instagram to congratulate Cahill and remind everyone what the celebration was about. They parped: "Did you catch Tim Cahill, our new brand ambassador, doing the TripADeal 'T' after he scored the winning goal last night? Congratulations Tim!"

Not sharing the company's enthusiasm, many fans took to social media to blast Cahill in cashing in during a moment of national pride.

Australia face Honduras in the first leg of their World Cup play-off on Thursday, November 9. Book your flights with TripADeal n– ... oh.