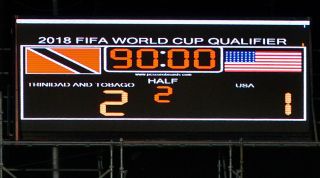 The Rupert Murdoch-owned FOX were left red-faced on Tuesday night after the United States failed to qualify for Russia 2018.

The company forked out $400 million for the television rights to both the 2018 and 2022 tournaments, but now face a more uncertain tournament next summer while the U.S. players sit it out at home.

Few will feel too sorry for FOX, though, who were awarded rights to the 2026 World Cup without even having to bid for them – a token of gratitude from FIFA after FOX helped in the transition of scheduling Qatar 2022 for the winter.

The company is projecting losses of '$10 to $20 million' in advertising sales after the USMNT's failings, which are made to look even worse given that a supercomputer predicted their chances of qualifying were 93% going into the final round of fixtures.

As well as losing to Trinidad & Tobago, both Panama and Honduras managed victories against Costa Rica and Mexico respectively - making this the first World Cup since 1986 that the USA have failed to make.