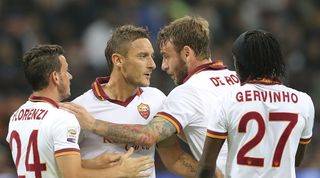 When Francesco Totti signed what will be his final contract for AS Roma, his greatest hope was that he would see his beloved club back competing for top honours – before he calls it a day when he turns 40, in two years' time.

And after Saturday evening at the San Siro, where Totti produced a wonderful performance as Roma lived up to their 'La Magica' nickname, the veteran must be confident that this season will bring its just reward.

The 3-0 crushing of Inter marked il settobello: a seventh successive win for Rudi Garcia’s side, building on a record start to the campaign. Totti was at the hub of it, scoring the first two – to take his tally to 14 in Milan – and then instigating the breakaway for the third with a deft turn and touch on the edge of his own area.

He thumped home his first from the edge of the area after just 11 minutes; 10 minutes later he equally emphatically dispatched the second from the penalty spot, after Gervinho's snaking run had been recklessly curtailed by Alvaro Pereira.

The third was finished off by Alessandro Florenzi on the stroke of half-time – but it was Totti, on the edge of his 18-yard box, who had hung out the ball to tempt a challenge before flicking a pass for Kevin Strootman to stride towards the Inter area and release Florenzi. The 22-year-old's angled shot summed up the Giallorossi's all-round cutting edge – and this without an out-and-out striker.

Totti has started the season through the middle of the attack, flanked by the hard-running Gervinho and Florenzi, but that position is a mere starting point for the captain to take up well-defined positions in a deeper role. At times, exemplified by the build-up for the third goal, the skipper is almost back in defence.

It's not a licence to roam where he wants. When Roma lost possession, Totti was the first line of defence; when the visitors sat back in the second half, he was the one leading the counter-attacks.

Totti is the conductor of tempo and many of his passes are simple one-twos played around the centre of the pitch or to even more telling effect along the right flank or on the right of the final third where he brought Gervinho and Miralem Pjanic into the game which enabled Florenzi and Strootman to burst forward.

Of course, for all Totti's brilliance this is no one-man show. The runs of Gervinho, Florenzi and Strootman give him plenty of options, but at the same time the redeployment of Daniele De Rossi in front of the defence offers greater cover.

Now once more a settled figure at the club, perennial “future captain” De Rossi is dominating the centre of pitch; when he wins the ball, he is expected to use it in a manner that helps the team build a swift attack.

Although Roma have scored a league-leading 20 goals in their seven games, even more impressively they have only conceded one goal – and Garcia has revealed some of the secrets to the side’s new-found solidity. Last season Roma finished outside the European places, but the new French coach has masterminded an amazing turnaround built from the back.

Garcia, whose sister revealed to the Italian press that her sibling had honed his tactical skills playing Subbuteo as a 10-year-old (although he denied any memory of such a pastime), explained that he had studied the two areas where he felt the team had failed last year: quite simply, the attack and defence.

Although Roma scored on a regular basis, Garcia believed that the team should be converting more of the chances they were being served from a strong midfield, where De Rossi and Pjanic took up most of the passing duties.

However, he also felt that the defence was too fragile and the midfield were caught between supporting the attackers and dropping back to cover, which used up a lot of energy. Now, with new signing Strootman also a precise passer as well as a physical presence, there is more balance in the centre of the pitch.

The arrival of 36-year-old goalkeeper Morgan De Sanctis has added experience and security, but ahead of him there are further reinforcements that have adapted to Garcia’s game-plan. While former Roma coaches Luis Enrique and Zdenek Zeman demanded that the full-backs pushed high up the pitch, under Garcia they rarely venture forward.

Well versed in the world of Serie A, Douglas Maicon (32) has made an excellent start to the campaign at right-back. Another seasoned veteran, former Udinese centre-back Mehdi Benatia (26), has added strength at the heart of defence – while also getting on the scoresheet twice already. Similarly, the return to form of Italy left-back Federico Balzaretti has added to both defence and attack: the 31-year-old scored the vital opener in the Rome derby against Lazio.

Last but not least, Garcia has been working on the players’ mindset, with motivational speeches on how good they are and how they must have the hunger to return Roma to the top of the Italian game again. This has had a marked effect on Leandro Castan: having looked very indecisive last season, the Brazilian hasn't put a foot wrong so far.

Although a settled side has done well, Garcia will have to start to make changes soon. The yellow cards are mounting up, with Balzaretti already suspended for the next match against Napoli following his sending off at Inter.

For now, substitutions have been kept to a minimum – and when they have occurred, it's often to bring on another wise old head in Rodrigo Taddei (33). Garcia has used the Brazilian five times so far in midfield to help close out games, while Marquinho is another replacement who has played his part in the latter stages of games.

However, it's Totti who still stands head and shoulders above any other player in Italian football. The personal statistics alone are something to behold: the second-highest all-time Serie A goalscorer on 230 goals; 300 overall from 674 competitive games over a two-decade career that began as a 16-year-old on 28 March 1993.

His early form has increased the clamour for a recall to the Italy squad for next summer’s World Cup finals, but for now Totti will be content with a few more virtuoso performances evenings such as Saturday’s at La Scala del Calcio if it enables his beloved club to return to the summit of Serie A.