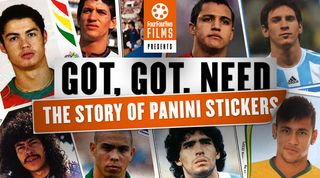 In a digital age, why are people still obsessed with the simple thrill of tearing open a packet of stickers? After the global success of their 2014 World Cup album, FourFourTwo headed to Panini HQ in Italy to get the inside story ahead of Russia 2018.

We met up with everyone from the super-collectors to those responsible for actually creating each album; from picking World Cup squads months in advance to ensuring 32 different countries are all happy with how their players look.

We've discovered the value of a Diego Maradona sticker in South America in 1986, and the moment when the German press playfully accused Panini of “knowing too much” after their 2014 World Cup squad announcement.

Get the real scoop on sticker collecting here...