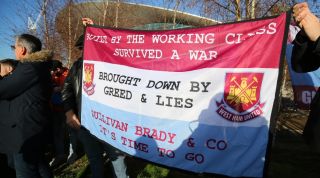 Before West Ham’s game against Everton on Saturday, when hundreds of home fans gathered to protest against the state of their club under the current owners, you could be forgiven for expecting that another afternoon of rage, rebellion and toxicity at the London Stadium.

Instead though, the mood was a more apt one of dejection and disinterest. Issa Diop put the home side ahead in the first half, Dominic Calvert-Lewin equalised shortly afterwards, and the rest of the game played out to an atmosphere that landed somewhere between misery and melancholy. If West Ham fans - whose protest marked a decade in the ownership of Davids Gold and Sullivan - are grieving the state of their club, then they are becoming dangerously close to reaching the acceptance stage.

They mustn’t allow this to happen – although they can hardly be blamed for having their enthusiasm whittled away by grim pursuit of season-on-season survival that seems to have become their club’s new MO. Thankfully there’s an obvious way to put a stop to that. Whisper it, but could West Ham’s best hope lie in relegation?

Clinging on to Premier League status has not prevented them from becoming that most ominous type of club: one that turns good players bad. Sebastien Haller, Pablo Fornals, Joao Mario, Andre Ayew and Jose Fonte are just the most obvious examples from recent years of players whose evident talent seems to have been drained out of them upon joining West Ham.

There is a common denominator here. And as much as the owners might argue otherwise, the problem is not bad decisions made in isolation but a deep-seated culture of mediocrity that infects even the brightest talents. There have been successes, most notably Dimitri Payet and Marko Arnautovic. Yet they both responded to their own blossoming by seeking new employment and downing tools accordingly. That is hardly a trend that reflects well on the club, nor one that screams sustainable success.

From the outside looking in, West Ham doesn’t just seem like a badly run club, but a club that has completely forgotten how to enjoy itself. Even interpreted in the most generous light, the recent re-hiring of David Moyes carries an unmistakable undertone of joyless pragmatism.

In this sense, the failed experiment that was Manuel Pellegrini elicits some sympathy,  in that he was in many respects the right idea – exotic, progressive, high-pedigree, risk-taking – but with one inescapable pitfall: he has all the personality of a garden shed. And it’s personality, more than investment or footballing talent, that West Ham have so desperately lacked of late.

Go back as far as two decades, and West Ham’s roster of permanent managers – Roeder, Pardew, Curbishley, Zola, Grant, Allardyce, Bilic, Moyes, Pellegrini, Moyes – reads dangerously like a who’s who of cheerless drones. That list of names would be far from ideal for any aspirational mid-ranking club, let alone one whose self-image contains a certain amount of thrill-seeking glamour.

Relegation would allow the club to escape the clutches of this means-to-an-end misery and invest fully in a manager who can be given the time and scope to build something from the bottom up. The “he knows how to keep a club in the division” argument would be mercifully redundant, opening up a whole new tranche of candidates who are distinguished by ambitious excellence rather than gritted-teeth survivalism: Paul Warne, Michael Flynn, Lee Johnson. And that’s before you look abroad, as has worked so well for Norwich and Leeds (Marcelo Gallardo, anyone?). It would also afford them the vital luxury of being able to get this decision wrong without it being the cue for impending armageddon.

Broadcasting money lost out on by their disappearance from the top flight would be somewhat offset by the division’s famously generous parachute payments: 55% of equal-share broadcast revenue in the first year after going down, then 45%, then 20%. West Ham also have the added benefits of being based in London – a draw for many high-pedigree players – and of a stadium that brings in a matchday revenue of £27.1m (the typical figure for Championship clubs hovers between £5-10m, Leeds boasting the division’s highest with £17m).

Going down might be a bleak experience in the short-term, but beyond that it could be exactly the jolt of life West Ham need, not least because the ensuing campaign would be one they could spend looking upwards rather than nervously over their shoulders.