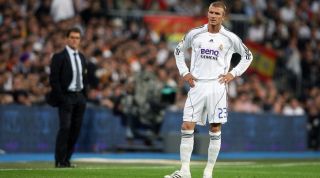 There is the story of a British player; a ‘Galactico’ who found himself in exile at the Santiago Bernabeu. He was told he would never play another game for Real Madrid, ostracised until he would leave at the first possible opportunity, and publicly declared unwanted by his manager.

But this is not the story of Gareth Bale.

Instead, it’s a throwback to a time when David Beckham was made public enemy number one in the Spanish capital. Having gone through something similar himself, he knows what Bale is feeling right now. Beckham also arrived as a big-name signing, only to end up a scapegoat for fans, media and his own manager as he plotted his next move.

Beckham never faced the level of vitriol thrown at Bale in recent times, although that would be very different in a social media age. While the Welshman is currently being pushed out the door against his will, Beckham's situation came as a result of his decision to join the LA Galaxy at the end of the 2006/07 season. After the announcement in January 2007, Fabio Capello said his outgoing superstar had played his last game for the club.

But the conclusion to Beckham’s Real Madrid career should give Bale encouragement, and provide him with a precedent to follow. While the ex-England captain looked as good as finished at the Bernabeu, he was back in the squad as early as February 2007 – and by the end, a key part of the team that delivered a La Liga title by May.

Beckham was so successful in turning the tide of opinion against him that Real Madrid tried in vain to reverse his move to the United States. Club president Ramon Calderon had initially claimed that Beckham was “going to Hollywood to be half a film star,” but by the end of the season he was doing all he could to ensure his player's stay.

It will take a lot for Bale to restore his status in the Spanish capital. The rhetoric around the Welsh winger has become so toxic that it’s difficult to envisage how that can be neutralised, but all it takes is one big game or big goal to start the process of reconsideration. Once again, Beckham’s example shows the way: he forced his way back into the fold after a crucial equaliser in his first game back from exile.

To remain stubborn and banish Bale completely, Zidane would be self-sabotaging. The 30-year-old is still one of Real Madrid's best players when in form, capable of special moments few in the Frenchman's squad are. What’s more, the ACL injury suffered by Marco Asensio during pre-season has created an opening in Los Blancos' frontline, to compete with Eden Hazard, Karim Benzema and Vinicius Junior.

The collapse of Bale’s move to the Chinese Super League has left him trapped. Bayern Munich, Manchester United and Tottenham have all been linked with a move for the winger at one point or another, but for a variety of reasons – financial ones, mainly – have not been interested in offering him an escape route this summer.

And so Bale must make the best of a bad situation. He has no other option. The transfer window is open until the end of the month (in Spain), but the true window of opportunity for the Welshman to leave Real Madrid might well be closed. Bale has a whole season ahead of him, and at this stage of his career he simply can’t afford to waste it.

Pictures published in the Madrid press last week hinted at the disconnect between Bale and his team-mates. Left at home for the Audi Cup games against Spurs and Fenerbahce, he was photographed playing golf with friends during Real Madrid’s defeat to the former. Asked whether Bale’s attitude concerned him, Zidane replied: “Well, we'll see when we get back. He has to look after his responsibilities. We will see what he has done in Madrid. I won't get into his personal life. But I think he has done training.”

And here is where the difference between Bale and Beckham might be found. While the latter found himself a target, nobody ever questioned his commitment. When he was ostracised from the first team, Beckham still trained like he was playing every game. If Bale can accept his current reality and find a way to motivate himself again, there’s no reason why he can’t turn things around.

The Wales icon has already done a lot to succeed Becks as a successful Brit in Spain, but could do himself a solid this time by trying to follow his example just one more time.