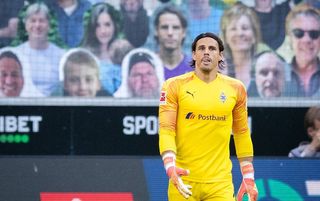 It’s been intriguing to watch football’s broadcasters adapt around this new normal. From the first days of the Bundesliga’s restart, when the sport’s stripped-back ambience echoed around cavernous stadiums, to the artificial crowd noise and fancy graphical overlays that now garnish the matches and decorate our televisions screens.

Quite unexpectedly, the viewing experience has actually been rather comforting. It doesn’t compensate for what has been lost, not really, but neither is it as a bad as most of feared it would be. It’s the best of a bad situation and that’s something to be thankful for.

EIGHT IN A ROW

For the players themselves, though, there can be no such deception. Like actors in front of a green screen, the illusion just isn’t the same as it is for those in the theatre and, logically, that should create some differences in performance.

And so far it is. In fact, one of the features of the resumption so far has been the number of mistakes. It might be an illusion perpetuated by the circumstances, but it does seem as if the game is producing more moments which are harder to explain – the kind which aren’t necessarily slapstick or high comedy, but which fall well below the standard expected of top-flight professional teams.

What, for instance, was Borussia Monchengladbach’s Yann Sommer thinking with that ludicrous pass back across his own penalty box which gifted Bayern Munich the lead over the weekend? Or a few weeks before, when Porto goalkeeper Agustín Marchesín committed a similarly grave error against Famalicao; would he have been as lackadaisical under normal conditions?

What was he thinking!? 🤯Yann Sommer produces an amazing save one minute, and then does this he next! 😬He won't want to see that again... pic.twitter.com/UUlspOjfV7June 13, 2020

Going even further back, Freiburg’s Robin Koch produced a startlingly poor piece of defending against Eintracht Frankfurt at the end of May. Koch is actually an excellent centre-half and yet, having made a smart intervention to retrieve possession, he failed to properly shield the ball from Daichi Kamada, allowing the Japanese to steal in and poke the ball into the net.

It’s one of the strangest goals you could ever wish to see and even now, three weeks later, there’s no obvious explanation for what it was that Koch was trying to do.

But he’s hardly alone. On Monday night, Sevilla conceded a catastrophic equaliser to Levante. Two days before, the normally resolute Getafe defence were similarly charitable in gifting Granada their own leveller. A day later, on Saturday, miscommunication between Leganes’ Ivan Cuellar and Chidozie Awaziem produced the quintessential mix-up between goalkeeper and centre-back, allowing Enes Unal to run through on an unguarded goal.

The incidents themselves aren’t unusual, but to see them occur with such regularity is. Why is this happening?

The answer of course, is that we don’t really know. But we can still guess. You wonder, for instance, whether the energy supporters generate helps players to concentrate. For a healthy adult, a normal concentration span is estimated to be between 10 and 20 minutes, meaning that producing 90 minutes of error-free football is statistically very unlikely. Perhaps, then, crowds aren’t just a source of emotional sustenance for players, but also integral to their ability to resist the kind of natural lapses which they need to avoid.

The circumstantial evidence is compelling. Any diagnosis obviously requires proper expertise – not to be found in this column, sadly – but a lot of these mistakes do seem to have their root in a lack of focus. The ones mentioned above, for instance, aren’t the result of physical or technical failures, but an inability to see danger or to properly assess situations.

Fernando Pacheco’s red card over the weekend might actually be the best example of all. The Alaves ‘keeper came charging out of his box during the first-half against Espanyol, catching the ball two or three yards outside and earning the clearest of red cards. It was game-changing, but also bizarre – it was too strange to be a simple miscalculation, with Pacheco looking more like someone who actually wanted to be sent off and who just had somewhere more important to be.

A layman’s explanation? The lack of crowd is a more significant issue than it was expected it to be. Prior to football restarting, empty stadiums were only viewed as a blight on the spectacle, rather than a challenge to the mechanics of the sport itself. Without spectators however, there exists a psychological gulf between the implied importance of games and their actual significance – and some players are struggling with that, with their concentration rising and falling intermittently, like bulbs on a dodgy circuit.

So yes, those difficulties are occurring alongside other, more practical issues, like the truncated preparation time and the broader oddity of the post-pandemic world, but this might be the biggest challenge facing Premier League players as they get ready to return. If an occasion looks, sounds and smells like a training session, how can it actually be a crucial match, contested in front of a live, millions-strong audience?

That’s the dilemma – and the mistakes are coming.