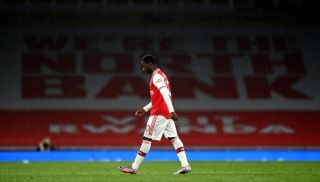 The problem with writing about VAR at the moment, with so many Premier League games taking place day after day, is that there’s always the risk of another controversy. Twenty-four hours is a long time at Stockley Park.

But that’s a dance worth the danger, because this is a problem which seems to be getting worse.

Counting up all the different issues is pointless – and deeply tedious – but two from the last few days stand out. The red card awarded to Eddie Nketiah in Arsenal’s game against Leicester, and the failure to send off Burnley’s James Tarkowski during Wednesday night’s game at London Stadium.

NKETIAH SENT OFF! 🔴He's only been on the pitch a few minutes! Chris Kavanagh sends Nketiah off for a high tackle, after watching replays using the pitch-side monitor. 📺 Watch on Sky Sports PL📱 Follow #ARSLEI here: https://t.co/jWh8VzrRNA📲 Download the @SkySports app! pic.twitter.com/1ktZTWczagJuly 7, 2020

If anything, Tarkowski’s challenge was the worse of the two – it was higher, more reckless and less excusable than Nketiah’s had been. Nevertheless, the different decisions aren’t necessarily a problem. After all, the game has always depended on varying interpretation and – with or without VAR – the human element of officiating can never be homogenised. The pursuit of total consistency is an illusory and unachievable aim.

But the processes are still baffling and those two instances provide just the latest example of how VAR continues to make a rod for its own back. The problem was in the mechanics used. One review was the subject of laborious replays and the use of the pitchside monitor. The other, superficially, was only given the courtesy of a quick glance, before it was decided that Michael Oliver’s original yellow card was sufficient.

Can James Tarkowski count himself lucky here?His challenge on Jarrod Bowen only produces a yellow card 😬But @karenjcarney thinks it was worse than Eddie Nketiah's against Leicester... pic.twitter.com/J215f4Wx4vJuly 8, 2020

Those who insist that these contrasts don’t matter are missing the point – or at least misunderstanding some of the problems blighting VAR. Fundamentally, many fans object to the interruption it causes and the now mandatory pause in celebrations after a goal. Fair enough, because that’s been difficult to get used to. But among those same supporters – and in the community as a whole – there are also many who don’t entirely trust VAR, and who view its involvement as random and selective in its scrutiny.

It’s very easy to dismiss those people, to characterise them as cranks or conspiratorialists, but what are they supposed to think? A day after seeing their side drop two important points as a result of a red card, how are Arsenal fans likely to respond to a similar incident being treated in a completely different way?

MESSI ON THE MOVE? Why everyone's talking about how the world's best plyer could leave Barcelona

The perception of fairness is really, really important. It’s not enough just to say that “VAR looks at everything’ or to quote the IFAB rulebook back at anyone raising an issue. That isn’t the path to acceptance. Instead, trust has to be earned and the process begins with ensuring that all teams feel evenly treated, and to introduce measures to encourage that perception.

Time-limits to reviews? Mandatory checks of the monitor for certain types of decision? Whatever the right answer, it has to be something which provides a framework of consistency.

Yes, accusations of bias and agenda are tiring and that kind of paranoia shouldn’t be indulged, but neither should VAR be doing anything to encourage it. If, for instance, it spends three-and-a-half minutes trying to prove that Manchester United haven’t conceded legitimately, but barely breaks stride in disallowing a Southampton goal, then – very obviously – that will provoke a very specific sort of reaction.

And this is its biggest challenge. People will grow used to the delays, resentfully or otherwise, and they’ll adapt to the pedantry of the offside law. What they will never accept, however, is a lack of uniformity in the way decisions are made and how they’re justified.

Sometimes there are written explanations at full-time, sometimes there aren’t. Sometimes the pitchside monitor is used, sometimes it isn’t. Often there are too many replays and the game stops for too long. At the same time, however, in retrospect, just as frequently it seems that enough time isn’t taken to judge a situation and make a ruling and – for different reasons – that proves just as damaging to VAR’s reputation.

This is what has to be fixed. Within reason, because reactive procedures can never be identical, but while such obvious disparities continue to exist, so will the antipathy towards Stockley Park.