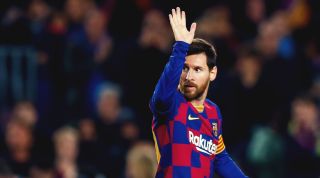 From the moment Lionel Messi scored his first Camp Nou goal, most Barcelona fans have known how they wanted this love story to end. The Argentinian wizard in his late 30s, waving goodbye to the Cules, a tear in eye - a trophy in his hand would be nice, too.

For some, the magic of Messi is only enhanced by the fact he's a one-club man. For others, he's not tested himself in waters less choppy than Barcelona's, and can never be considered the greatest for it. That is until now... perhaps.

The whispers are getting louder regarding the future of Lionel Messi at FC Barcelona - something that hasn't been said very often. There's talk of him seriously considering his future, of rejected contracts and unhappiness with the Barcelona hierarchy. Could he really be about to leave?

Why is Lionel Messi rumoured to be leaving Barcelona?

Rumours have come and gone in the past about Lionel Messi leaving the club that he's won four Champions League titles and six Ballon d'Ors at. In the past, he's been linked with Manchester City, Inter Milan, even Arsenal – they nearly poached him with Cesc Fabregas in 2003 – and even a huge-money beyond the continent.

He's never had to go, though. Why would he, when this is the best place to win titles?

But Messi is now the longest-serving Barça player; the furniture has been replaced a number of times over, with the No.10 the one constant in Catalonia. With that, there have been ideas that he runs the club now.

Apparently he wanted Antoine Griezmann to join, Quique Setien in as manager, and was desperate for the club to bring back tantrum-throwing boy-king Neymar from his Parisian palace, to get the old 'MSN' band back together.

If reports are correct, though, Messi now doesn't like Griezmann after a spat and would like his employers to bring in countryman Lautaro Martinez - if it's not too much to ask.

Ultimately though, a lot of that is noise - and Messi doesn't like it. The Argentinian just wants to compete, is frustrated at how the club is being run and doesn't like this image of him ruling from a throne, calling for Setien's head and giving the thumbs up at the potential new signings that panicked Barça board members thrust before him.

JUST LEO All the Lionel Messi news, comment, analysis and quizzes in one place

Twice this season, the Barça captain has made public statements on issues at the club; first to rebuke Eric Abidal's suggestion that the players were to blame for coach Ernesto Valverde's dismissal, before Messi responded to a source claiming the players didn't want to help the club by reducing their wages, calling it, "something we always knew we would do".

This isn't like Messi. On the pitch, Barcelona have struggled of late - more than they have in years, with the club's poor transfer policy and neglect of La Masia graduates beginning to show.

Now, with a year left on his current deal, contract talks have now stalled. He's not sure the club truly match his ambitions of that fifth Champions League triumph, and for the first time, there is genuine belief that he could be off next summer.

Which clubs could Messi move to?

Messi to the MLS? Maybe in a few years... (via David Beckham/Instagram) pic.twitter.com/15EDDRRhSUJanuary 30, 2018

Messi's contract will expire in 2021 - with a break clause whenever he wants to take it - and no club on Earth would refuse (arguably) the greatest player who's ever lived. If Barça let him go - he's 33, let's face it - they could choose to rebuild without the former boy wonder, similar to how Real Madrid did with Cristiano Ronaldo.

Inter Milan are the longstanding frontrunners for Messi's signature: unsurprisingly, given their history with Argentinian legends. It would reignite the Ronaldo rivalry, pair Messi up with Lautaro after all, and give Inter the status that they haven't had since the Brazilian Ronaldo donned their blue and black. Plus, who wouldn't want to see the novelty of Lionel Messi swapping Griezmann and Suarez for Ashley Young and Romelu Lukaku?

Likewise, Juventus would surely give an arm and a leg to have Ronaldo and Messi in the same team. Barcelona legend Rivaldo – who backed Messi over Abidal – seems to think Juventus could be the answer.

It's hard to imagine both Ronaldo and Messi together, though. Perhaps Adidas, who sponsor both the Italian giants and Messi, could help smooth that transition? If so, German heavyweights Bayern Munich shouldn't be ruled out either.

Similarly, you can never overlook PSG's tendency to shake money at, well... at anything, really – and Messi's friendship with Neymar would surely be a plus. But given they have the player expected to dominate the 2020s, the best player of the 2010s might not be all that exciting.

ALSO READ Ready to take over from Messi and Ronaldo? Why Kylian Mbappe could define the next era of football

A move to the Premier League would go down well here at FourFourTwo, and it wouldn't be off the cards. Messi is close with Aguero and Pep Guardiola, after all - we might finally see how Messi manages cold, away trips to Burnley on Monday nights.

There's a big 'but', though: by next summer, City would only be one year through their two-year European ban (should their appeal be unsuccessful). It's hard to see Messi making that move in those circumstances.

Beyond that, the little genius may look out of Europe. The MLS also has a big Adidas deal - would they look to recruit the brand's biggest name? Andres Iniesta chose a career twilight in Japan, Xavi chose Qatar and Guardiola himself knew he wanted to manage, and studied in Italy and Mexico. All options are on the table; Socrates wound up at Garforth, for goodness sake (more on that in the current issue of the magazine).

Leo has claimed it's a dream to return to Newell's Old Boys, the Rosario-based club he played for as a child. Were Messi's family to agree to it, Argentina could provide the solution.

What could stop Messi leaving?

EUROPE How Bayern Munich will look with Leroy Sané – but can their new signing help deliver Champions League glory?

Messi and his employers have solved these disputes before. Inter Milan came in for him years ago, but Barcelona moved heaven and Earth to keep their star; likewise, when the much-publicised tax scandal threatened his place at Camp Nou, Barça made sure to back their man.

It could come down to a straight knock-out between Messi and Josep Maria Bartomeu, the club president. Elections are due next year and Bartomeu will be under the spotlight for the way that he's run the club; either he'll try and convince Messi to sign the contract, he'll let the star run down his deal and hope for re-election – a risky game to play – or Messi will wield some of that power he's reported to have, and get Bartomeu out before then.

Bartomeu publicly insists that Messi will not leave the club. A high-profile signing to keep the captain on-side has worked before, but given how disappointing Ousmane Dembele, Philippe Coutinho and now Griezmann have been, will it work again?