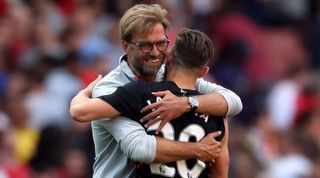 Footballers often surprise you in interviews. Whether wearing the frequently ridiculous clobber, displaying a watch that’s more closely related to a stately home’s ostentatious sundial or – perish the thought – actually turning up on time, they’re a step into the unknown.

Occasionally, however, they’ll offer something that’s both surprising and interesting. Former Barcelona midfield metronome Xavi is a member of this latter group and needed only four words.

“The guy Lallana,” he told FourFourTwo in early March, staring straight ahead, “quality.”

Unfussy, straight to the point and full of conviction, it summed up the former Barça captain in a nutshell. Yet it felt out of place. Adam Lallana was hardly the name you would expect one of the most decorated players of his generation to reel off in a list of England’s up-and-coming talents, to go with Raheem Sterling and Eric Dier.

True, the 28-year-old had looked much improved for Liverpool in the six months since Jurgen Klopp had replaced Brendan Rodgers the previous October, but Lallana’s name was still associated with underachievement and a lack of end product. Indeed, when Klopp arrived at Anfield, the former Southampton midfielder featured towards the top of most people’s list of players most at risk from an anticipated Merseyside cull because of his languid style and habit under Rodgers of rarely lasting 90 minutes.

Quite the opposite has transpired; Lallana is now one of the first names on the teamsheet. After Klopp’s first game in the Liverpool dugout – a goalless draw at Spurs – Lallana collapsed into his new manager’s arms, exhausted but determined to provide the non-stop work and calmness in possession that the German demands. Perhaps we should have seen it coming. Lallana had plateaued under Rodgers, but under Mauricio Pochettino at Southampton, his work ethic and talent were plain for all to see.

“Do you see how Adam always starts our pressing moments?” Klopp was overheard saying after the 3-0 Merseyside derby win over Everton in April, one of Liverpool’s best performances of the season.

The pair, who are next-door neighbours in nearby Formby, might even have the odd late-night chat. “He has got a nice family, nice kids and I see him walking the dogs,” Lallana told the Guardian before last season’s Europa League final. “One time I was taking my little boy up for a bath and when we got to the landing we saw him [Klopp] taking out the bins so I put my lad on the balcony and he was shouting, ‘Klopp, Klopp’ and giving it the fist-pump celebration. He just looked at him and gave him a wave.”

Yet by the end of that campaign, doubts remained. He affected games more, yes, but four goals and six assists wasn’t exactly the greatest return for a creative midfielder who appeared in 30 league games. This season, however, has brought change, and not just in the form of the two league goals he’s already scored.

Instead of playing on either the right or left wing like last term, Lallana has moved inside to form part of a midfield three alongside new boy Gini Wijnaldum and captain Jordan Henderson. It’s worked wonders. Few are the English players who can control the ball on the half-turn like Lallana.

Playing more centrally, he allows Klopp’s rock-and-roll side to transition quicker from defence into attack. In the 4-1 home win against Leicester, he covered more distance (13.1km) in a match than any player managed in the whole of last season. His second-half thunderbolt into the top corner proved that Lallana 2.0 – one of the few to impress on England duty at Euro 2016 – is capable of providing both dynamism and footballing skill at the same time.

Why so serious? Klopp and Ranieri show Jose, Pep and Conte that football's meant to be fun

Such is Lallana's form this season, Emre Can – comfortably Liverpool’s best midfielder last time out – may struggle to get his place back in the team now he’s returned from an ankle injury. The Reds will need his dynamism in Saturday’s home fixture with Hull. So impressive against Leicester, Arsenal and Spurs – last term’s top three – as well as last Friday’s Chelsea win, the Englishman will be vital to avoid the slip-up Liverpool managed at Burnley.

Xavi was onto something all along. A couple of hours after the Barcelona man had told FFT about his admiration for the Reds No.20 at a Qatari hotel back in March, Liverpool played Manchester City. They won 3-0. Adam Lallana scored the opener, assisted another and played a significant part in the third in a man-of-the-match display. Perhaps he could be the English Iniesta.