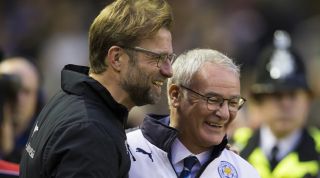 Public displays of affection are one of the modern world’s gravest atrocities, and a football stadium is one the few places you can generally expect to be free of them – as long as Jurgen Klopp isn't about.

Liverpool’s win at Stamford Bridge last Friday was notable for many things, but perhaps what stood out most was Klopp’s astounding warmth towards his players on the final whistle. Rather than the customary managerial congratulation of a high-five on the way down the tunnel, the German shepherded his squad to the travelling fans, treated each one in turn to a fawning on-pitch debrief, and dispensed hugs and hearty backslaps to anyone who entered his radius.

It was a scene of goofy schmaltz that seemed wildly out of place in the world of Premier League football, where managers – if they're paternal at all – tend to be the type of father figure who inspires fear rather than comfort – less Jack Black, more Jack Torrance.

It wasn’t a wholly alien sight, though. A central theme in Leicester’s title win last season was Claudio Ranieri casting himself as the fun-loving dad to his family of misfits and cast-offs, soaking up each win with an air of good-natured amusement that stood in sharp contrast to the standard battle-hardened demeanour of his peers.

Nowhere is this demeanour more apparent than among Europe’s elite coaches – a group in which Klopp can be counted, and counted as the sole member who appears to derive any pleasure from his profession.

Manchester's current pair of duelling A-listers are each, in their own way, the finest examples here. Between them, Pep Guardiola and Jose Mourinho seem to experience a grand range of emotions in their work, but enjoyment is categorically not among them.

To watch Guardiola on the touchline – issuing a constant stream of frenzied instructions, manically critiquing each off-the-ball run, forever realigning his back four – is to watch a man being driven mad, striving for control over something he isn’t part of. (This fundamentally futile urge for touchline autonomy could be termed Benitez Syndrome, after a man similarly obsessed with control to the point that he lost sight of the wood from the trees: the Spaniard’s first act after Liverpool’s life-affirming Champions League triumph was to march onto the field and lecture Djibril Cisse on how he could have better sprung Milan’s offside trap.)

During Guardiola’s time in charge of Barcelona – a period which should have been the most joyous four years of any coach in football history – a thick mop of Catalan hair rapidly became a barren surface from whence nothing sprung; at the end of it he needed a year off, sipping lattes in Greenwich Village, to recover. Now, even when he’s harmlessly chatting tactics, he seems oddly feverish, each sentence spoken as if there’s a bomb under his chair that will explode at any moment.

Marti Perarnau, Guardiola’s biographer, describes him as “a man in search of perfection, although he recognises it as an impossible goal… often left with a pervading sense of unfinished work.” Guardiola may be a master entertainer, but he’s far from chilled out.

Mourinho, the other side of a frazzled coin, is a man equally removed from the notion of enjoyment. He's amassed success at a quite staggering rate, and yet none of it seems to have been appreciated on its own terms. Each title has instead been a means of proving a point, winning a fight, achieving sporting immortality and keeping that inner fire raging.

Think back to the finest moment of Mourinho’s glittering career – Inter’s tactical masterclass at the Nou Camp in 2010 – and his response to it: a mad-eyed dash into the centre-circle, a prolonged and furious salutation to the travelling fans, and then an angry scuffle with some opposition players. Throughout it all, no hint of a smile at any point.

Mourinho's old chum Arsene Wenger is tortured by his profession in a slightly different way. "When you don’t win you are responsible for so many unhappy people," he has said. "Sometimes it’s better not to think about it because it could damage your life too much. There is a strange vibration in the street when you lose at home. You feel responsible. But you cannot survive if you only feel that – you’ll kill yourself."

Of Europe’s other supercoaches, Antonio Conte lands midway between Guardiola and Mourinho: a rampaging, gesticulating presence driven by a deadly inner fury (witness his threats to kill his Italy players for the crime of granting Romelu Lukaku a sight of goal during the Euros). Diego Simeone’s impromptu pitch invasion at the end of the 2014 Champions League Final lands him in the same bronca-fuelled bracket.

Not that there’s anything wrong with all this. It makes for an entertaining spectacle, for a start, and – as a certain retired Glaswegian will tell you – seething authoritarianism can be the surest way of hoovering up silverware. Certainly, all of these men will be able to look back on absurdly successful careers. But you do wonder if any will have found the time to actually enjoy themselves en route.

The bemused detachment of Carlo Ancelotti and Manuel Pellegrini is a pleasing antidote to this Fergie Formula, but they are men able to enjoy themselves despite their job rather than because of it, their touchline manner of contented aloofness a far cry from Klopp’s full-blooded involvement.

The three do share a crucial trait, though, which is that they recognise football’s fundamental triviality. Ancelotti and Pellegrini knew better than to take seriously the Premier League pantomime; they were fully aware their job was only ever temporary but they also knew coaching a superclub is good work if you can get it. Klopp recognises the pantomime, too, but embraces it for what it is – harmless fun – and encourages his players and fans to derive as much enjoyment from it as they can.

It’s an outlook that taps into one of football’s most overlooked truths: hardly anyone, at any point in their life, is fortunate enough to live out the fantasies of millions – but footballers do exactly that, twice a week. In that context, the player’s default post-match setting of steely professionalism – “Good three points, now we prepare for the next game” – admirable as it is, seems like one hell of a way to miss the point.

Liverpool’s former chief executive Rick Parry tells the story of the club’s trophy-hoarding golden era thusly: “When the players reported back to pre-season training, [Bill Shankly’s right-hand man] Ronnie Moran would greet them in the Melwood dressing room. He would take the league championship medals out of a bag and chuck them to each player without comment or ceremony. Then he would launch into what was needed for the coming season.”

All well and good – and, proof being in the pudding, a fine recipe for sustained success – but more than a little joyless, for sure. Much has changed in the ensuing decades, but the sense of elite-level football being an unrelenting treadmill, with everyone locked in a dead-eyed pursuit of the next big prize, has not.

What has changed since the days of Shankly and Fagan is the breathless nature of the sport and the media circus that surrounds it. You can see why Pep & Co., caught in the eye of the storm, might find the whole thing a tad stressful: even from the outside looking in, football in 2016 can seem like a perpetual whirlwind of results, fixtures, fall-outs, transfer windows, press conferences, contract stand-offs, hirings, firings, Things We Learned, handshake controversies and all sorts else. As such, the ability to simply take a breath and soak up a pleasant moment has become a lost art.

In light of which, watching Klopp using a semi-final win as an opportunity to whip the Anfield crowd into a jubilant frenzy, or seeing Ranieri’s magnificently childlike response to Champions League qualification, is gloriously refreshing. Living in the moment might be a dying art, but those two are doing their damnedest to keep it alive.

When Klopp and Ranieri call time on their careers, there will be managers with more medals, better pensions, and greater legacies. But there won’t be many – or groups of players, or sets of fans – who’ve had as much fun. And if that means a few public hugs and kisses along the way, then perhaps that's a small price to pay.