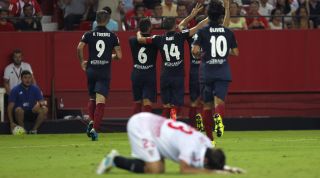 At the Sanchez Pijuan two weeks ago, there was nowhere to hide. Sevilla had no intention of doing so; the fact the opponent was Atletico Madrid, a team with whom they share a rediscovered rivalry, motivated them even more. The hosts flew out of the traps, playing with the kind of conviction expected of a team that had lost just once at home in their previous 40 encounters. And then Koke, Antoine Griezmann and Jackson Martinez had their say.

The match finished 3-0 to Atletico, but the margin of victory could have been greater. There was no hiding from the visitors’ vast superiority, not for Sevilla nor for Diego Simeone, even though he tried.

The Atleti coach acknowledged that his side had produced “one of our best games on the road in recent times,” but no matter how convincingly they had defeated the Europa League holders, Simeone refused to entertain talk of the title. The word ‘contender’ still gets treated like some kind of vulgarity by the Argentine. Simeone was keen to ensure his side avoided falling into the trap of believing their own hype last season. That is crucial this year too, particularly after the club lavished over €100 million on new additions.

Luciano Vietto, a precocious talent who was handed his professional debut by Simeone at Racing Club, has arrived at the Vicente Calderon after a terrific breakthrough season at Villarreal. The arrival of Martinez, top scorer in the Portuguese Primeira Liga three seasons in a row, further boosted Atletico’s forward line. The spotlight inevitably followed. “Names don’t make teams or squads. They only generate expectation,” Simeone warned.

A quick glance at the league table after the victory in Andalucia, however, reveals that Atletico are joint-top, higher than city rivals Real Madrid and Barcelona, as well as Sevilla, Valencia and Villarreal, sides who Koke believes will be Atleti’s closest competitors this term. When the dust settles from their showdown with champions Barcelona on Saturday evening, they could be even higher.

Indeed, the idea that Los Colchoneros are still outsiders for Spain’s biggest prize sounds increasingly hollow. Even Simeone, quick to play the underdog card, will have trouble denying the obvious symbolism of the clash with Barça, with consecutive titles having changed hands in this fixture over the last two seasons.

For now, though, the party line from the Atletico camp remains unchanged, even though the squad has evolved to suit the rigour of challenging at at both domestic and continental level.

Arda Turan and Mario Mandzukic may have departed this summer but, unlike exits in years gone by, the reason was not because the club could no longer match their ambitions. Somewhat unusually for Atletico, the focus has not been on the players who have departed but the ones who have replaced them.

Comfortable in their new skin

This weekend, Simeone will be on the lookout for evidence of growth when Atletico host Barcelona. Looking at the squad at Simeone’s disposal, it is hard to pinpoint an obvious weakness. Their quality and strength in depth is now arguably more impressive than their Catalan counterparts, at least until Turan and Aleix Vidal can be called upon in January when the ban on fielding new signings comes to an end.

The new boys have already seemed to facilitate new ways of playing. Filipe Luis predicts Luis Enrique’s outfit will try “to control the ball and we, as always, will be strong at the back and look to hit them on the break” this Saturday, but for the returning full-back to describe it in that way – Barcelona attacking and Atletico simply defending – is almost reductive.

Turan may have crossed the divide this summer, citing his weariness at fulfilling the tactical demands and defensive responsibilities ordered by Simeone as a reason for the move, but the truism that Atletico are merely reactive and can only do damage on the break could soon become outdated.

Simeone spent much of pre-season talking up the potential of a 4-3-3, and duly sought players who could force the issue higher up the pitch. Vietto, Yannick Ferreira Carrasco and Oliver Torres all arrived, increasing the options at the 45-year-old’s disposal.

“The good thing is the variations we have,” explained Koke, Xavi's heir apparent who made his home on the wing but is now expected to return to the middle of the park. “We can pass the ball more or have people who work hard.”

“Vietto, Carrasco and Oliver are all quick and forward-thinking, but they’re also hard workers and their approach is the same,” Simeone added. “The club [has] reinvent[ed] [itself] but what counts most is that the structure doesn’t change.”

“I want to be important,” announced Torres – Atletico's new No.10 and former Porto loanee, not the club legend now in his second spell at the Calderon. From the very outset he has been key, as have Griezmann and Diego Godin, who both opted to stay put despite interest from elsewhere.

This combination of the old and the new could be what makes Atletico great again. The game against Barcelona on Saturday could act as a measure of how far they can go this season. Another performance like the one the Sanchez Pizjuan hosted before the international break will not allow Simeone & Co. to hide from their tag as genuine title contenders any longer.