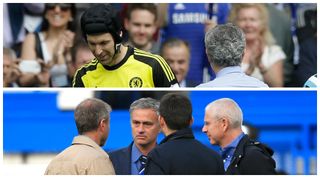 For the second consecutive season, Chelsea have lost a genuine legend to a Premier League rival. Frank Lampard’s surprise switch to Manchester City last summer was a convoluted transfer which arose because he was out of contract, but Petr Cech’s situation is more straightforward. Arsenal put in a bid, Chelsea accepted, and the Czech shot-stopper has swapped west London for north. It’s difficult to remember a player of his calibre moving directly between top Premier League clubs in recent years.

The situation at Stamford Bridge is very clear. Jose Mourinho, naturally, was against the move because it solves one of Arsenal’s main problem positions. Owner Roman Abramovich, on the other hand, had promised Cech last summer that he’d be free to leave, to a club of his choice, if he spent the year on the substitutes' bench and Chelsea received an acceptable offer. Cech wanted to remain in London because his family are settled, and therefore the Arsenal bid worked out well for everyone. Except, that is, for Mourinho.

“One thing is Mourinho and another is Mr Abramovich, and another thing is the board, because the board is a little bit of me and a little bit of other people,” Mourinho said in May, immediately framing the situation as a source of conflict. “If it was my decision, the decision is Petr to stay. That’s it. It would be my decision for Petr to stay. Even against his will? Yes. I think that the club is more important than the player.

“For me, decision number one, Petr will stay. After that, second point, to go but not in England. The option I don’t want is for him to go to an English club. But, I repeat, I am just the manager and he means so much for this club and what he did in this club. If the club decision is different to mine, I will accept it.”

And Mourinho’s final sentence proves that he realises he didn’t have the power of a veto. Mourinho lost not one, but two decisions - whether Cech was staying, and whether he was moving to another Premier League club. He won’t appreciate being overruled quite so publicly.

The Cech transfer tells us a great deal about the power struggle between Mourinho and Abramovich at Chelsea, and also about their differing approach to football in general. Mourinho is, of course, a fiercely determined competitor, intent not merely on maximising his own team’s quality, but happy to spite other clubs in the process too. It’s always been assumed that Abramovich took roughly the same approach, but instead this displays a surprising sense of honour and dignity in the Russian's dealings.

If the roles had been reversed, and in a parallel universe Chelsea were attempting to sign Arsenal’s long-serving backup goalkeeper, it’s impossible to imagine Arsene Wenger being overruled by Stan Kroenke. Other clubs might find disagreement between board and manager, but the saga wouldn’t play out in such an exaggerated fashion, conducted through the media as much as the boardroom.

It demonstrates that Mourinho clearly lacks the power that top-level managers demand - these days, seemingly as much of an important condition as wage demands - and also harks back to the reason why he left the club the first time in 2007.

That, again, was about power rather than underperformance. OK, Chelsea hadn’t won the league in 2006/07, for the first time under Mourinho, and results were disappointing that autumn, too. But realistically Mourinho and Abramovich parted ways because of a disagreement about who was in charge.

A pair of signings the previous summer, Michael Ballack and particularly Andriy Shevchenko, were clearly Abramovich buys rather than Mourinho buys. There’s a sense that Jose might not be as good a ‘politician’ as he likes to think, at least these days. He lost a power struggle at Real Madrid, albeit mainly against senior members of the dressing room rather than the president of the club, but it was still a surprisingly lonely time for a man previously considered excellent at the simple concept of dealing with people.

Even at Chelsea, Mourinho might not have as much authority as he likes to believe. He could previously count upon members of his first Chelsea team - the spine of Cech, John Terry, Lampard and Didier Drogba - as being unequivocally on his side. Now, with only Terry remaining, there is potentially less support from within the dressing room in the event of a dispute. Abramovich, meanwhile, has close relationships with many of the team. Besides, the players know from experience that Abramovich isn’t afraid to sack high-profile managers if needed - he will outlast Mourinho at Chelsea.

Mourinho must pick his battles. Ultimately, this is about a backup goalkeeper - a man who played only six Premier League games last season. Bosnian Asmir Begovic, who seems likely to swap Stoke for Stamford Bridge, is a perfectly competent reserve keeper, and is also much younger than Cech with room to improve, whereas the Czech was gradually on the way down. There probably isn’t much point Mourinho kicking up a fuss over this issue, because there will be other, more important disagreements to come in the future.

If the worst happened, and Mourinho departed Chelsea, he might try giving Abramovich a taste of his own medicine. With Lampard and now Cech moving to rival Premier League clubs, it’s not unthinkable that the next Chelsea legend to follow suit could be Mourinho himself. “The day Mr Abramovich thinks I am not good enough for Chelsea, I want to work, Mourinho said earlier this year. “And if possible, in England, too.” Abramovich has been warned. If Cech can do it, so too can Mourinho.