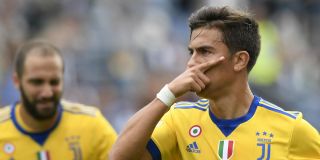 The 69-year-old politician is a Juventus fan, and has caused controversy in the past for praising Kim Jong-un’s work.

Razzi revealed on Radio Cusano Campus that he is also looking to lure pop group Il Volo (below) to Pyongyang in the hope of sparking a ‘national party’.

“I know that Kim Jong-un is very passionate about sports and music, so that’s why I’m trying to get the Juventus superstar involved.

“If I take Dybala there, there will be 200,000 people in the stadium and they’d have to put up big screens too - it would be a national party.”

Last season, Han Kwang-song became the first ever North Korean to score in Serie A when he netted for Cagliari. This summer he joined Serie B side Perugia on loan, and has netted five times in his first four league matches.

Razzi revealed earlier this year that Kim Jong-un "knows all about Serie A" becauase of Han's exploits.