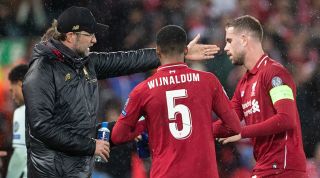 Liverpool are undoubtedly in the best shape they have been in for many years under Jurgen Klopp this campaign, with the charismatic German fuelling a record-breaking title challenge in the Premier League. The competition for silverware is so fierce, however – with Tottenham, Manchester City and the Reds all still in with a chance of totalling 90 or more points – that the margin for error is fine.

Klopp and the club’s recruitment staff endeavoured to plug gaps in last summer’s transfer window, ensuring that the effervescent forward line of 2017/18 was stabilised by a world-class defensive setup, in order to ensure that Liverpool dropped as few points as possible and keep within those margins.

But as the business end of 2018/19 approaches, the biggest issue for Liverpool comes between defence and attack. The balance of Klopp’s midfield is now a cause for concern.

This seems like a contentious view, given that it's been an excellent season for many of the Reds’ midfielders on an individual basis: Fabinho has now settled and is producing top-level performances in the No.6 role, along with deputising comfortably at centre-back; Jordan Henderson dominated a Bayern Munich engine room of Javi Martinez, Thiago Alcantara and James Rodriguez in the Champions League at Anfield; and, perhaps most impressive of the lot, Gini Wijnaldum is arguably the first name on the teamsheet right now.

Fabinho, Wijnaldum, Henderson, Naby Keita and James Milner have provided Klopp with the option of varying his formation, and Liverpool are now capable of setting up in both 4-3-3 and 4-2-3-1 systems. The latter, in particular, facilitated Fabinho and Wijnaldum's stable partnership midway through the campaign.

But while two primary systems are better than one, both have often hinged on one particular player standing out: in the 4-2-3-1, it’s Xherdan Shaqiri on the right wing; in a 4-3-3, it’s the third man in midfield. And when the emphasis is on Liverpool to break down deep-lying defences – as evidenced in back-to-back 0-0 draws against Bayern and Manchester United in February – the Reds can struggle if that key player isn't at their best.

Against Bayern, with Fabinho required to partner Joel Matip in defence, Henderson sat deepest while Wijnaldum and Keita alternated in the more advanced berths. Against United, Fabinho returned to the No.6 role, with Henderson taking Keita’s place further forward alongside Wijnaldum.

Liverpool created 10 chances against Bayern, but only two came from the midfield (one apiece from Henderson and Keita). Against Manchester United, only one of their six chances created came from that trio in the middle (via Fabinho). In both games Klopp’s right-back created the most opportunities (four); in both games, the Reds dominated on the front foot but were unable to break through. They proved all too predictable.

While these are two very recent examples, this is no new phenomenon. This season, Wijnaldum, Fabinho, Henderson and Keita have created 43 chances between them in the Premier League, mustering three assists (Fabinho with two, Keita with one). Last season, Philippe Coutinho alone created 40 chances in just 14 league games before his £142m Barcelona move in January, assisting six.

Klopp clearly was, and is, aware of this. Coutinho's departure to Catalonia carved out a bigger role for Alex Oxlade-Chamberlain, and after the England international picked up an injury which has effectively kept him sidelined for an entire year, Lyon captain Nabil Fekir was identified as a priority target. A move for the Frenchman broke down and Shaqiri was signed from Stoke instead. But after a bright start for the Swiss, Klopp now appears to favour the 4-3-3, meaning the summer signing has no direct avenue back into the starting line-up. As Shaqiri's half-time withdrawal in the 3-0 win over Southampton in September proved, the manager doesn't trust him in a central role.

Another versatile midfield creator will surely remain Liverpool’s biggest priority as they plan for the next transfer window, but this isn't to suggest that Klopp’s midfield is a lost cause this season – in Shaqiri, Keita and the returning Oxlade-Chamberlain in particular, there are three solutions already in his squad.

Of those to have played at least 1,000 minutes in the Premier League for Liverpool this season, only Milner (2.2) and Mohamed Salah (two) have averaged more key passes than Shaqiri per 90 minutes (1.6). Last season, he created more than twice as many chances as any other Stoke player (77), and made the top 10 for key passes per 90 in the top flight (2.3) – more than any Reds player to make at least 15 appearances.

Oxlade-Chamberlain created the fifth-most chances for Liverpool in the league last term (34), despite playing at least 700 minutes fewer than the top three (Salah, 62; Roberto Firmino, 57; Sadio Mané, 49). In fact, he was close to replicating Coutinho’s levels of creativity, averaging one key pass every 44 minutes to the Brazilian’s 28. No other midfielder in the squad (with 500+ minutes) created on a regular basis, and only Milner (one every 41 minutes) is doing so this season, but largely from full-back.

With Shaqiri, Keita and Oxlade-Chamberlain, Klopp is able to call upon three players confident in possession who play with their heads up, willing to drive at opposition defences and play a decisive pass into the final third. It may require a measure of patience, perseverance or another tactical tweak, but the approach in these flat, attritional contests against the likes of United and Bayern could simply be finding a place for one – or more – of these players in the starting lineup.

ANALYSIS Can they turn it around? 5 reasons for Liverpool’s recent drop in form

It would certainly lighten the load on Liverpool's attacking talisman Salah, who according to Klopp after the Old Trafford stalemate, has found difficulty against stubborn, top-level defences due to “how we use him, how we play and how we move”.

Rather than blunting Liverpool’s attack by overburdening the Egyptian, the resolution for Klopp appears to be supplying the ammunition for his top goalscorer. More creativity from deep would certainly aid his efforts in doing so, and could prove key in the final months of the season as the Reds push for the title.