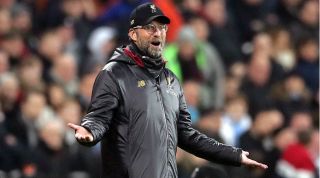 Played six, lost two, won two, drew two – Liverpool’s start to 2019 has not been what Jurgen Klopp would have wanted.

That those two victories – against Brighton and Crystal Palace – have been delivered via a one-goal margin in tense circumstances has added to the anxiety among Anfield’s fanbase.

But it’s the last two results, draws against Leicester City and West Ham, that have caused the most concern.

Of course, there’s plenty of media hyperbole from two such results – much of which overlooks the fact that until these two draws Liverpool had amassed 43 points from a possible 43 points against teams outside of the top six this season – but there are some concerns that have arisen since the turn of the year.

Exiting the FA Cup at the first opportunity meant Liverpool’s relatively thin squad had plenty of recovery time, with Klopp using the free weekend in January to take the squad to the warmer climes of Dubai.

However, that’s something that appears to have backfired, with several players struggling with sickness since returning from the 30 degree-plus heat and humidity of the UAE, to freezing temperatures on Merseyside; Virgil van Dijk lost four kilos according to the manager, while several others have similarly struggled.

Van Dijk would likely have sat out a game, but such are Liverpool’s defensive injury issues he’s been required to continue his ever-present status in the Reds’ lineup. The Dutchman is needed due to the ongoing unreliability of the likes of Dejan Lovren – the Croatian now sidelined with another hamstring injury.

News of Joe Gomez’s extended absence due to requiring another surgery is a massive blow to the title-contenders, with Gomez having first been due to return in mid-January but now out until at least March and possibly longer. That the Englishman was both Van Dijk’s first-choice centre-back partner and backup to Trent Alexander-Arnold – who has also been sidelined for the past month – is somewhat questionable planning.

Such injuries in defence, coupled with no desire to strengthen in January and Nathaniel Clyne’s exit on loan, has fuelled the anxiety among some of the fanbase. Of course, that overlooks Klopp’s long-term beliefs and planning, with the manager preferring a smaller, tight-knit squad and to ensure new signings are part of the strategy going forward than quick-fix solutions to a short-term problem.

It doesn’t seem so long ago that Liverpool’s new-found squad depth was being lauded though.

Back in the earlier months of the campaign, Daniel Sturridge was proving to be an effective substitute – not least with his late equaliser at Chelsea – and Xherdan Shaqiri was producing match-winning cameos as recently as December when he scored twice against Man United. Since then, though, the Swiss has struggled for form, while Sturridge has dropped behind Divock Origi in Klopp’s thoughts.

The FA Cup defeat at Wolves appears to have been a turning point for each, with Sturridge playing 12 minutes since then and Shaqiri going four appearances without a goal or assist for the first time in his Liverpool career.

When Liverpool failed to lift the title in 2009 and 2014, the lack of depth beyond their starting XI was a major reason for it. First there was David N’Gog, then there was Iago Aspas. Now there is, with respect, Origi.

If Liverpool’s front three of Roberto Firmino, Sadio Mane and Mohamed Salah don’t score, there’s a lack of goalscorers elsewhere or from the bench.

At the turn of the year, as Liverpool prepared to face Man City at the Etihad, Klopp’s side had the opportunity to go 10 points clear of last season’s champions.

That they had the opportunity for such a huge gap to be opened came about, of course, due to City’s surprise defeats to Crystal Palace and Leicester. Pep Guardiola’s side later lost to Newcastle, offering the chance for Liverpool to go seven clear going into February.

The concern for Liverpool will be that City’s blip has been and gone. Will they now produce their relentless best to ensure they remain top? Or will they be distracted by competing in four competitions?

Either way, the pressure is now on the Reds in their home game against Bournemouth on Saturday to ensure they now return to the top of the table after City pulled ahead on goal difference, albeit having played a game extra.

Increasingly this season Klopp has used 4-2-3-1 as his preferred formation, especially in league games.

A change back to 4-3-3 against West Ham saw a disappointing performance and seemingly the one who suffers most from this alteration is Firmino. The Brazilian struggled at the London Stadium, subbed early after one of his worst showings under Klopp – whether due to the change in role from being a number 10 to a number 9 when the formation changes, or something else altogether.

It also creates an imbalance in midfield: Liverpool look more solid with Fabinho in the side and in a 4-2-3-1 formation. Gini Wijnaldum’s absence was also felt against the Hammers, with the Dutchman having played an understatedly key role this campaign.

The problem is, that if Klopp doesn’t want to play Shaqiri, there are few other options to bring in to one of the four attacking positions in 4-2-3-1 shape.

Clearly, another attacking player is required in the summer, especially with Sturridge (out of contract) and Origi set to depart.

Perhaps the most concerning aspect though is the performances in these recent games. Liverpool have not played well in any of their six games in 2019 – which is in stark contrast to how they finished 2018 with eight wins from eight games in December.

Had they played well against Leicester or West Ham, there might be less reason for concern. They didn’t, and arguably were lucky to get a point from each fixture. Individually and collectively they have been below-par.

Whether the perceived pressure is a reason for this cannot be quantified, but Klopp will be working hard to ensure outside voices aren’t infiltrating the minds at Melwood.

Pragmatism was seemingly a new-found trait of Klopp’s side before January hit, often not playing particularly well but going on to win games 3-0, as they did at Watford for instance. That’s what is now required again.

What Liverpool need is a routine victory, a game where they aren’t pushing for a winner or holding on for a result in the final stages. A performance to quell the pessimism and relieve the anxiety. With 15 days until the next league game – that being a trip to Old Trafford – after Bournemouth at Anfield, three points are absolutely vital on Saturday.