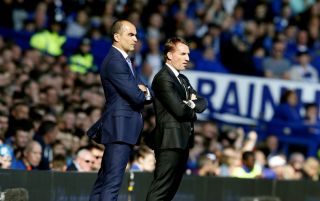 Everton take on Liverpool at Goodison Park this weekend, with the Toffees hoping to dent their Red neighbours’ title hopes.

Meanwhile, Brendan Rodgers looks set to take over at Leicester City, in what will be his first Premier League job since… er, Liverpool failed to beat Everton at Goodison in October 2015.

After that game finished all square, at 1-1 – the fifth time in their previous six matches that Liverpool had taken the lead only to finish with a draw – Rodgers was relieved of his Anfield duties.

Plenty has happened in the three-and-a-bit years since then, and when the two sides face each other this weekend, their starting XIs from this day in question are almost unrecognisable – though there could be a couple of familiar faces.

Today, we’re asking you to name both line-ups from that fateful match for Rodgers, as well as the four substitutes who came off the bench. We’ve put eight minutes on the clock for you to name all 26. Let us know how you get on at @FourFourTwo, and see if you can make it onto our daily Twitter leaderboard...

THEN TRY… Why derbies really matter to us – and always will