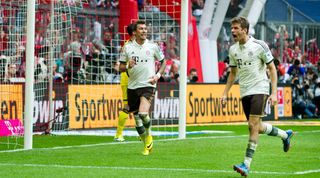 A glance at the Bundesliga table paints a familiar picture. Bayern Munich (almost) at the summit, five wins from six and looking ominously unbeatable once again. Move along folks, nothing to see here.

So why, then, are Pep’s boys being doubted ahead of Wednesday night’s Champions League tussle against Manchester City?

Well it’s probably because, behind the cold figures, the reigning champions haven’t looked their sharpest this season – even with the former all-conquering Barcelona chief at the helm. In fact, at times they’ve looked rather penetrable on the rare occasions they have been tested.

The stats do little to prove the above. The Bavarians have conceded just two goals in seven games, boast average possession of around 70% both at home and away, and look well poised to land a second title on the bounce.

On top of this, they’ve given away the second-fewest shots per game (8.6), and made the fewest tackles (14.3) and interceptions (7.7) – all signs of a side in total control. So what gives?

Saturday’s largely uninspiring 1-0 win over Wolfsburg (a “draining game,” according to goalkeeper Manuel Neuer) combined Neuer’s heroics with good old-fashioned elbow grease. At Schalke the previous weekend they were dreadful for the opening 15 minutes before romping to a 4-0 win with two goals from set-pieces.

Far from cause for panic, but it's fair to say the seemingly indestructible world-beaters haven’t looked like that yet. Given the relatively weak standard of their opponents, this is perhaps their first real test of the campaign.

It was to be anticipated, though – expecting Bayern to make an entirely seamless transition from Jupp Heynckes’ glorious regime to that of Guardiola’s was unrealistic.

It’s not like the former Barcelona chief hasn’t stamped his mark yet. For starters he’s done away with Heynckes’ 4-2-3-1 formation, pushing Bastian Schweinsteiger back into the position in which he made his breakthrough.

A combination of injuries and man love, meanwhile, has seen Philipp Lahm morph into the role of midfield enforcer. “He is perhaps the most intelligent player I have ever trained in my career. He is at another level," gushed Guardiola on his German star after Bayern’s Super Cup win over Chelsea.

It’s a testament to Lahm that barely an eyelid has been batted since his transition six games ago. The best full-back in the world is simply doing what he does best – being reliable. His success comes in its simplicity.

Against Wolfsburg he made a game-high 88 of 95 passes, just 11 of which came in the opposition half. It comes as no surprise to see that 69% of his efforts were short and played in the middle third. He created no chances, recovered the ball just twice, made one interception and only one tackle.

But why bother? Lahm’s job is merely to keep things ticking over, leaving the rest to the fearsome four of Schweinsteiger, Arjen Robben, Toni Kroos and Franck Ribery just ahead.

Lahm’s new surroundings have paved the way for a resurrection in the right-back slot for Rafinha, the forgotten Brazilian discarded by Heynckes. Last season, with David Alaba dazzling at left-back and the formidable Lahm ahead on the other flank, the 28-year-old’s first-team opportunities were limited.

But, like his team-mate, there’s been cause for nothing more than muted admiration for Rafinha’s work this season. Guardiola has been quick to hail his “intelligent” defender, and it isn’t difficult to understand why.

The Brazilian has remained among Bayern’s top passers this season, linked up well with Lahm, and all with 90% distribution accuracy.

It helps that Guardiola’s 4-1-4-1 isn’t really that at all, though. The German champions’ ability to dominate the ball so easily is aided by the flexibility of the Spaniard’s system, which effectively allows both Alaba and Rafinha to push forward alongside Lahm and, often, beyond.

While Kroos and Schweinsteiger scurry around in midfield, Robben and Ribery make nuisances of themselves alongside Mario Mandzukic. Bayern’s wing wonders have hit the ground running again this season, the brilliant Ribery in particular with his three goals and unwavering industry.

This, in a nutshell, is what Manchester City are up against at the Etihad Stadium. Thankfully for Manuel Pellegrini’s side it’s too soon for injured midfield pair Mario Götze and Thiago Alcântara, while Javi Martinez’s continued absence means Lahm and Rafinha aren’t moving anywhere just yet.

It’s certain to be a busy night for City’s holding anchors Yaya Toure and Fernandinho, who’ll be forced to contend with their busy counterparts and help out full-backs Pablo Zabaleta and Aleksander Kolarov.

That said, an up-and-at-‘em approach seems key to knocking Bayern off their stride. City were humbled by Dortmund’s high-pressing game on home soil last season (despite grabbing a late draw), outshot 22 to 12 and outpassed double in the final third despite hogging the possession. It should be a lesson learned.

Pellegrini knows as well as anyone that allowing Bayern too much time and space is essentially suicide.

All in all we’re set for a fascinating midfield battle – especially if City’s engine room pistons can truly upset the rhythm. Toure was pivotal in crucial areas of their 4-1 derby trouncing of city rivals United, while Fernandinho’s magnificent all-action display at Stamford Bridge for Shakhtar Donetsk last season encapsulated the Brazilian’s potential for destruction.

Nobody says it will be easy, but with the right mindset it’s entirely possible Pellegrini’s men can walk away from this Champions League encounter with a rare smile across their faces.  It goes without saying, however, that Matija Nastasić & Co. need to shape up after Saturday’s defensive horror show at Aston Villa.

Take your eyes off this one at your peril.