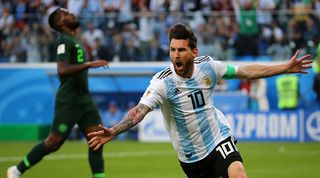 Astonishing. Cometh the hour, cometh... Marcos Rojo? But yes: with Argentina hanging on for a hero in the dying embers, there was the Manchester United defender to steer home brilliantly and keep Argentina alive in this World Cup.

It hasn't looked like it for most of this tournament – and indeed didn't look like it for most of this game – but the gods were smiling down upon them in their final Group D match against Nigeria. Lionel Messi's 15th-minute opener was his glorious introduction to this World Cup; a gorgeous effort from start to finish which proved once again why Argentina's No.10 is the greatest player this planet has to offer.

The inventive Ever Banega was finally granted a start in Jorge Sampaoli's XI and dazzled in a first half of incisive passing; never more so than with his carefully guided ball over the top of Nigeria's defence which set Messi on his way. But it was all him from there. First he ushered the ball down with his thigh, then caressed it under control with his boot before firing right-footed into the top corner. Those with a memory span under 10 days have been duly reminded.

But Argentine joy wasn't to last. When Javier Mascherano was punished for manhandling inside the box, Victor Moses made him pay from 12 yards. Argentina were going home at the Super Eagles' expense, and that didn't look like changing. That was, until the 86th minute when Rojo grabbed his moment to shine with aplomb. And now France await.

Only three points would do for Iceland against a slightly weakened Croatia, who knew they were through and would win Group D with a draw.

In the end they took the win to make it nine points from nine via Ivan Perisic's late winner, though, setting up a deserved last-16 encounter against Denmark. Croatia took the lead in this game when Milan Badelj stormed into the box late to larrup home beyond Hannes Halldorsson, but were pegged back with 14 minutes remaining when Gylfi Sigurdsson converted a penalty – second time lucky, after missing against Nigeria.

It wasn't enough for victory, though, and Heimir Hallgrimsson's side will finish bottom of their tough group. World Cup 2018 was always expected to be another mountain to climb for the smallest country ever to feature in football's showpiece event, but once again the Nordic nation leave with their heads held high. They're here to stay.

With France already qualified, Didier Deschamps shuffled his pack for their game against Denmark – and drew a blank. While Uruguay boss Oscar Tabarez switched up his midfield for the 3-0 win over Russia and was rewarded with a superior performance, Deschamps had no such joy.

Djibril Sidibe, Presnel Kimpembe, Ousmane Dembele, Steven Nzonzi and Thomas Lemar all came into the French side, yet Les Bleus looked as disjointed as they had in edging past Peru in the previous game. A draw with Denmark always seemed a likely outcome, though, the point apiece confirming France as Group C table-toppers and ensuring Danish qualification. Yet it was once again notable how toothless France looked in attack – bizarre, considering their wealth of attacking talent.

On the surface, seven points from three games appears impressive. But in a group that never looked the toughest, the French have scored three goals; one a penalty, another an own goal, and just one from open play. They head into their clash with Argentina still searching for a convincing formula – much like their rivals.

Peru: too little too late

Goals from Andre Carrillo and Paolo Guerrero gave their superb travelling support something to shout about, but there’s a harsher reality. When the pressure was on, Peru couldn’t convert. Now that there was nothing to play for, they (like Morocco in their 2-2 draw with Spain) suddenly found their shooting boots. Frustrating, as they’ve been an entertaining side.

Australia also exit rueing their lack of cutting edge. Mile Jedinak scored both of their goals from the penalty spot, and the Socceroos failed to take their second-half chances against Peru. Group C’s action won't live long in the memory, yet while France and Denmark never really shone, they at least put the ball in the net when it truly mattered (albeit not against one another).

Gareth Southgate isn’t about to tell everyone England’s starting XI before this week’s game against Belgium (after all, that’s his coach Steve Holland’s job). But he dropped a strong hint that his star striker would be rested for the Group G tie.

Southgate’s diplomatic quote that Harry Kane “knows the team is the most important thing” seemed to acknowledge that the Golden Boot leader was champing at the bit to add to his five World Cup goals, but might have to be satisfied with being protected before the knockout stages while others in the squad get a run-out.

Belgium’s own leading man Romelu Lukaku also seems highly unlikely to start. After scoring his second brace of the competition against Tunisia, the 25-year-old was substituted with minor ligament damage. He’s been rested from training this week, so the chances of him seeing action before the last 16 seem slim. Michy Batshuayi and Jamie Vardy might want to remember their boots on Thursday.