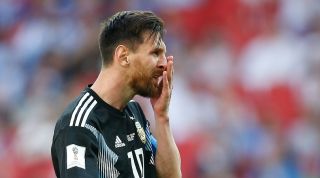 After Cristiano Ronaldo's stunning hat-trick against Spain on Friday night, it was inevitable that the planet's eyes would turn to Lionel Messi to see how he would respond when Argentina locked horns with Iceland at the Spartak Stadium. The World Cup is about far more than these two individual superstars, of course, but the Barcelona man was unable to match his Real Madrid counterpart's exploits in the first round of fixtures.

Argentina's extraordinary reliance on Messi was clear from the start, as the 30-year-old continually dropped deep in a bid to start the play and move the ball forward. His touch looked sharp and he managed to wriggle out of tight situations on multiple occasions, but Iceland were successful in keeping him off the scoresheet.

Messi twice went close with shots from outside the box, but he spurned a golden opportunity to put Argentina 2-1 up from the penalty spot, with his poor effort comfortably saved by Hannes Halldorsson. We imagine that went down well at the Portugal camp.

Didier Deschamps plumped for a front three of Antoine Griezmann, Kylian Mbappe and Ousmane Dembele for France's game against Australia, an attacking trio which looks frighteningly good on paper. Things didn't click on the pitch, though, and Les Bleus relied on a large chunk of good fortune to eke out a 2-1 win.

There was little in the way of combination play between the three forwards, all of whom are undoubtedly top-class players. Dembele was particularly quiet on the left flank, while Mbappe and Griezmann's contant interchanging didn't unduly unsettle the Australian backline. Olivier Giroud was introduced in the second half and it wouldn't be a surprise if he was used from the start against Peru on Tuesday, with Dembele most likely to make way.

Peru were beaten by Denmark on their return to the World Cup after a 36-year absence, as another missed penalty proved costly for a South American side. Christian Cueva blazed over from 12 yards just before half-time in Saranks, a wasted opportunity which was punished further when Yussuf Poulsen rounded off a Danish counter-attack just before the hour mark.

There were plenty of positives to take from Peru's overall performance, which featured a thrillingly fast start and an onslaught late on. They ultimately weren't able to beat Kasper Schmeichel in the Denmark goal, though, and it's Age Hareide's side who join France on three points in Group C.

If viewers' concentration was always likely to be waning by the time Croatia and Nigeria kicked off in the fourth and final game of the day, the two teams did little to help them stay alert.

This was a rather drab affair lacking in intensity, although the Nigerians were more guilty than the Croatians. Zlatko Dalic's charges played the better football throughout, breaking the deadlock through a Oghenekaro Etebo own goal in the first half and then doubling their lead via a Luka Modric penalty after the interval. It was a comfortable evening for Croatia, but this match won't live long in the memory.

History was made in Saturday's early game, as the Video Assistant Referee (VAR) overturned a decision at the World Cup for the first time. Match official Andres Cunha initially waved play on when France's Griezmann went down under the challenge of Australia defender Joshua Risdon, but consultation with the VAR team led to him changing his mind and awarding the penalty - the correct decision.

The VAR was also called into action in the third match of the day. The on-field referee didn't initially signal for a penalty when Denmark's Poulsen felled Peru playmaker Cueva, but upon review the decision was overturned and los Incas were rightly awarded a spot-kick. Unfortunately for them, Cueva was unable to take advantage.

Wimbledon begins in just over two weeks' time, but this summer's first call for new balls came on the third day of the World Cup in Russia. Ousmane Dembele discarded one Adidas Telstar 18 before taking a corner for France, with the ball having seemingly been burst after a 50-50 challenge.

Another was deemed insufficient for use soon after, and Lionel Messi was also unhappy with the one which Argentina and Iceland began their game with, demanding a replacement before taking a throw-in. It wouldn't be the World Cup without a ball-related controversy.

David de Gea made an uncharacteristic error on day two, spilling a rather tame shot from Cristiano Ronaldo into the back of the net to give Portugal a 2-1 lead. Two Spain goals in the second half looked to have spared the Manchester United goalkeeper's blushes, but Ronaldo's late free-kick earned the European champions a point and left De Gea open to criticism. The Spain No.1 has responded defiantly, though, and insisted the mistake won't affect his game going forward.

"My own criticism is bad enough. I am happy with the support from the manager and the lads," he said. "This can happen. It's a mistake. We put on our gloves and go out into the field and we know how difficult it is. I count on the support of the coach and my colleagues to continue. I will stay calm. It was a difficult ball, I'll keep training and try to do things right. I haven't killed anyone."

Everyone's favourite grumpy uncle was wheeled out for France's meeting with Australia, as Mark Lawrenson made his co-commentary bow at the 2018 World Cup. The former Liverpool defender was disconcertedly cheery early on, but it didn't take long until normality was restored.

Lawro's list of gripes throughout the 90 minutes included the following: VAR, Benjamin Pavard, Paul Pogba's haircut, players going down too easily, the weather not being as warm as it looked, Benjamin Pavard, Lucas Hernandez holding his head after being struck in the head, Didier Deschamps' tactics and Benjamin Pavard.

At one stage he was even moved to ask "what's the point?", perhaps in an attempt to kick-start a conversation about existentialism and the purpose of life. Tomorrow: Danny Murphy on metaphysical solipsism.