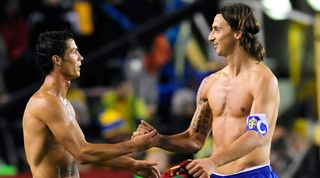 The draw for the World Cup play-offs means that either Cristiano Ronaldo or Zlatan Ibrahimovic will not be going to Brazil next summer, to the dismay of fans worldwide who had been hoping both players would miss out.

Ronaldo’s Portugal will face Ibrahimovic’s Sweden in a two-legged tie that will determine which pouty egomaniac will be forced to follow proceedings on television.

As the implications of the play-off filtered through, anguished commentators lamented that the world would be denied the opportunity to enjoy the absence of one of the game’s most narcissistic stars.

“It’s a massive blow for all football fans that one of [Zlatan] Ibra[himovic] and CR7 [Cristiano Ronaldo] will be watching the World Cup at home,” said fan Declan Monk. “In an ideal world, they’d both be at home.”

But others urged neutrals to look on the bright side regarding the participation of PSG’s pony-haired bully Ibrahimovic, or Real Madrid’s preening colossus Ronaldo.

“Everyone lamenting the fact that one of these two magnificently talented spanners will be in Brazil should remember the joy that comes with watching them on the biggest stage, failing,” pointed out football enthusiast Jonny Braithwaite.

“Think of Ronaldo’s futile attempt to be the hero in 2012, or Ibrahimovic being subbed off with his side behind in 2006, or Ronaldo’s tears after losing the final in 2004, or Ibrahimovic messing up the best chance of the game against Senegal in 2002. These are what childhood memories are made of.”

Braithwaite also pointed out that it was not too impossible that fans’ prayers would be answered, and that both Ronaldo and Ibrahimovic would fail to make it to Brazil.

“Maybe Sweden will win the play-off, but Ibrahimovic will sprain his ankle while kung-fu kicking a ballboy,” he continued. “Or maybe Portugal will get through, but Ronaldo will do his groin slipping on a patch of hairgel. The World Cup is eight months away, and anything can happen in eight months.

“Except one of this pair becoming likeable, of course. That would be literally impossible.”