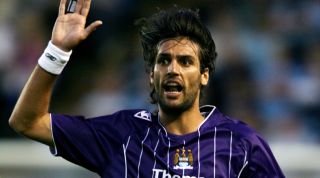 The 2019/20 Premier League table is bizarre for a number of reasons, not least the game of keep-away around the fourth and final Champions League spot, but it’s hard not to be drawn to the ‘goals for’ column and its refusal to sync up with teams’ actual positions.

Four teams have scored fewer than one goal per game, and while Norwich (24) and Watford (24) find themselves in the bottom three, the other two are sitting pretty in midtable.

Crystal Palace bring up the rear with 23 goals from 26 games but sit six points clear of the drop. Meanwhile, Newcastle United, with just four of their 24 goals coming from forwards, are a point better off than the Eagles.

However, while those tallies are hardly reassuring, other clubs have kept their heads above water in the past with even less potent attacks.

We begin with a two-for-one, from five seasons ago.

Villa might have ended the campaign in the FA Cup final, but they only got there after replacing Paul Lambert with Tim Sherwood and just about avoiding the looming spectre of relegation.

Under Lambert, the Villans scored in just six of their 12 home league games and just four of 13 on the road, winning three of their first four and just two of their next 21. Things were more chaotic under Tactics Tim, with a 4-0 win and a 6-1 defeat in the space of two months, but he did enough.

As did Dick Advocaat, who replaced Gus Poyet at Sunderland in March. Like Villa, Sunderland scored 31 goals in their 38 games, with eight in nine under the Dutchman at least qualifying as consistency. They crept over the line with a game to spare after – you guessed it – back-to-back goalless draws.

In their first title-winning season under Pep Guardiola, Manchester City scored 106 goals. A little over a decade earlier, with Stuart Pearce at the helm, they didn’t even manage one-third of that tally.

Sorry, Sunderland fans, that 2014/15 campaign wasn’t close to the worst.

Just two seasons after Kevin Phillips banged in 30 goals between August and May, Peter Reid’s team couldn’t even manage that many between them.

Phillips’ goal against Derby on the final day took them up to 29, but the striker was one of just three players to score more than twice in the league. Summer signing Lilian Laslandes left without scoring a single league goal.

Almost impressively, Reid’s team never went more than three games without scoring. If you’re scratching your head and frantically doing mental maths, we can help you out there: between January and March, they didn’t score more than once in any game, netting seven times in 12 outings.

It would get better the following year, though. Wait, what’s that? Oh, yes, we meant the opposite of that. In 2002/03, Sunderland scored just 21 goals all season and only seven after the turn of the year. An own goal from Manchester United’s Juan Sebastián Verón made him Sunderland’s joint fourth-highest scorer.

If you were asked to name one of the clubs on this list ahead of time, you’d have probably said Huddersfield.

The three goals scored by David Wagner’s side at Crystal Palace on the opening weekend of the season accounted for more than 10% of their total of 28, a sentence so absurd you should probably stop for a second, re-read it and really take it in.

The Terriers finished with more than twice as many cards as goals scored, while they weren’t even especially solid at the back – the 58 they conceded was more than two of the three relegated sides.

Their 10-game run-in brought just three goals at the right end, but you can’t fault them for knowing when to score them. In addition to point-earning efforts from Steve Mounié at Brighton and Laurent Depoitre at Chelsea, Tom Ince’s stoppage-time goal against Watford – one of just two he scored in the league that season – guaranteed another year of top-flight football. Given that second chance, they scored… even fewer in 2018/19. And conceded 18 more.

Hats off to George Graham. Not only did he take charge of Leeds’ worst goalscoring season in the Premier League era, but he has the same honour for Arsenal (40 goals in 42 games in 1992/93).

40 seems comparatively thrilling, though, in comparison to the Leeds side which handed Graham the reins in September 1996. The Yorkshire club scored five goals in as many games under Howard Wilkinson, but it took them seven matches to reach that milestone under the Scot.

To have one month in which you score just a single goal is careless, but for it to happen twice (in December and April, for those keeping score) it feels deliberate.

Their 28 goals were shared between just 10 players, with Lee Sharpe and Brian Deane sharing top honours with five a-piece, and somehow Graham’s side only missed out on a spot in the top half on goal difference.

QUIZ No Son, no problem: 5 options for how Tottenham Hotspur will cope with no striker