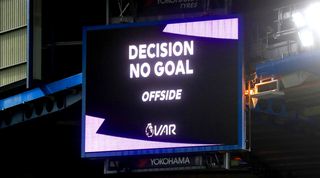 “The most difficult [issue] that people have [with VAR] is the offside rule,” Arsene Wenger, now of FIFA, claimed back in December. Having spent a lifetime shrugging in discontent at referees and their assistants, the ex-Arsenal boss is reportedly on a mission to revolutionise the way that offsides are given - or not given, as the case may be.

Currently, any part of the body that can play the ball can be deemed to be offside by mere millimetres. This season in particular, that rule has come under ridicule, particularly with the advent of VAR into the Premier League.

We have a habit of thinking of VAR like the Matrix; a machine-like overlord gone rogue, disallowing our previously perfectly-good goals. So to put the power back in the hands of humans - a switch to linesmen only flagging if there’s “clear daylight” between the attacker and defender - makes sense… right?

Well, not entirely. More goals might seem like a good thing - particularly so, on some drab Saturdays - but this proposed law only fuels further headaches.

How significant is a few millimetres?

In November, away to Aston Villa, Liverpool’s Roberto Firmino had a goal disallowed for his armpit being offside. It felt more like satire than an application of the law, and not for the only time during this campaign. Are officials actively mocking the rules when they draw dotted lines to mark a player being offside by millimetres?

In a sport that began as little more than a fight between two villages for control of a pig's head, it’s infuriating that your side’s striker can be deemed offside by such fine margins - and yes, the new law supposedly aims to rectify that. But at least with things as they are now, everyone knows where they stand. It isn’t a fun place to be standing, admittedly, but it’s clearer than the alternative.

How offside is offside, otherwise? Firmino could be deemed to be on because it’s not that much, but what if another ref disagrees? How much clear daylight is legal, exactly? Can we really profit from pencilling in grey areas into the letter of the law? These are just a few of the silly questions you can expect Jamie Carragher and Gary Neville to pore over on Monday Night Football, should the new law come into play.

The rule alters the basics of defending

Back fours are taught to hold their line as one to catch an attacker off. It’s something that Arsene Wenger, who inherited Britain’s most famous defence when he arrived at Arsenal in 1996, should be all too aware of.

The idea that footballers could now be a touch offside - at least according to the current laws - and still legally score, starts to throw all logic into disrepute. Gone is the perfectly rehearsed high line that a manager employs, replaced by a more slapdash approach, at least until we all get used to the new rules.

It’ll take even longer to get to a decision

Wenger also claims that he wants every ground to have a big screen for fans to see decisions - that includes Old Trafford and Anfield. Whilst it would be nice for fans to understand what’s going on when officials are deliberating over decisions, the popular opinion is that whatever decision is made just needs to be made sooner.

“Clear daylight” is not a phrase that features at all in the rulebook of association football. This is a game that’s increasingly played to the interpretation of the referee - what Michael Oliver sees as a 50/50 challenge, Mike Dean may well be more likely to penalise.

Do we really need to add even more fastidiousness to the application of the offside law? Or should we all just get on with it?

With VAR apparently becoming an omnipresent force in the game, the desire for football to hark back to the good old days is, naturally, quite appealing. To use human terminology of “daylight” rather than a scientific reasoning behind decision-making seems like common sense.

By putting more faith into the hands of those holding flags on the touchline, the law-makers of the game are actually making their jobs a lot harder. It’s difficult to judge exactly what constitutes a fractional offside when you’re assessing in real-time as it is - by tweaking what fractional actually means, FIFA are not making it any easier for linesmen. Which brings us to...

If in doubt, go to VAR

Except this law doesn’t make things clearer, as discussed. It doesn’t allow for fairness and though it may well allow for more goals - not that we’ve had a noticeable drop-off of goals this season in VAR’s presence - it doesn’t promise better entertainment. The reaction so far tells you enough - it’s fuzzy enough to lead to more confusion more than anything else, which is the opposite of what we all want. So here we are, back where we began, with officials looking back at the screen for minutes on end, and players bored, waiting for a decision - all because Kevin Friend and friends are deliberating over whether there's clear daylight between Olivier Giroud and Harry Maguire.

And anyway - judging by this season at least - do you really trust Premier League referees to properly enforce this proposed law?