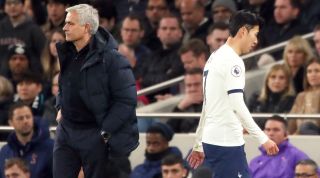 It never rains but it pours in North London. After losing Harry Kane for the majority of the campaign - as they seem to every season, now - Tottenham are now facing the prospect of playing the rest of this term without Son Heung-min either.

Manager Jose Mourinho famously has very strict criteria for the kind of striker that he likes in his side. Short of Fernando Llorente terminating his Napoli contract and signing for Daniel Levy on a free… how will Jose roll the dice on this one?

Perhaps the option that Mauricio Pochettino would’ve picked, were he still Spurs manager.

Lucas Moura is the obvious option to furrow the line up top for Tottenham and has goals in his locker, as well as superb movement. Lucas is the kind of false nine type that could pull defences out of position and create space for the likes of Steven Bergwijn and Ryan Sessegnon to attack diagonally - not unlike how Mourinho described Arsenal’s attack of Pierre-Emerick Aubameyang, Nicolas Pepe and Alexandre Lacazette combining, during a Sky Sports appearance in the autumn.

Moura isn't Mourinho's typical forward - in fact Lacazette fits the mould a little more. Still, it's clear Jose knows what he'd want from the wide-men either side.

Moura and Bergwijn together in a front two

This isn’t the first time the Portuguese manager has faced a crisis of this ilk. At Manchester United, Mourinho lost talismanic Zlatan Ibrahimovic towards the end of his first season, leaving him with no preferred target man to choose from.

Jose famously favoured a back three and front two against Chelsea at Old Trafford that season, masterminding a victory against Antonio Conte’s champions with Marcus Rashford and Jesse Lingard in attack. Could history repeat itself?

With Jan Vertonghen, Toby Alderweireld and Davinson Sanchez, Mourinho has three centre backs used to a back three under Pochettino. Aurier and Sessegnon are two attack-minded full-backs and Moura and Bergwijn are the kind of pacy, space-invading attackers that could roam free up top. It’s a similar system to one that’s worked before.

Jose vs the world: Ten years, no Champions League glory. The doubters say it's over. He disagrees

Jose Mourinho claims that Troy Parrott isn’t ready to lead the line for Tottenham. An understandable assessment from the manager really, considering the striker is just 18 years old.

One option however could be to opt for Dele Alli as the furthest man forward. Few Spurs players have looked as capable as the England man in front of goal under Mourinho - given that the manager wants a target man upfront with aggression and presence, this could be Dele’s audition as a no. 9. He certainly gets enough headed goals for Jose’s liking.

If Barcelona can do it - to much disgust from much of the football world, it has to be said - then why can’t Spurs?

As Tottenham are without their two most valued frontmen for this one, the FA could potentially see this is as an extreme circumstance worthy of giving them a chance to sign a replacement. It’s a long shot - especially given that there aren’t many players with release clauses in the Premier League that could be attained right now - but after Braithwaitegate, is it unlikely that Olivier Giroud could sign for Spurs after all?

Jose Mourinho isn’t exactly known for reinventing the wheel and showing revolutionary tactical masterstrokes when it comes to his management. No - the Special One does the basics better than anyone else. Hard defensive nous and man-marking masterclasses are more his MO.

You can pretty much bet your bottom dollar that it won’t happen, but wouldn’t it warm your heart for Mourinho to have a more tactically-intriguing paragraph in his Wikipedia bio and successfully mould a square peg into a round hole of epically different proportions? Despite his comments that Ryan Sessegnon isn’t a striker, he’s the best candidate following Bergwijn, Alli or Moura.

Here at FFT, we’d like to recommend Stuart Peace’s crackpot scheme of using David James up front once for Manchester City. Mourinho take note - we know you like a physically imposing no. 9.

QUIZ Can you name the Premier League top scorers from every continent?