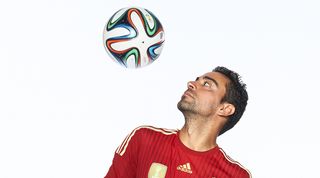 Have you seen Man City play many games this season?

Absolutely, and they’re clearly a really great team; very compact and from the middle of midfield up to the strikers, they have a lot of talent. [Alvaro] Negredo, [David] Silva, [Samir] Nasri, [Sergio] Aguero - although he’s injured, [Jesus] Navas, [Edin] Dzeko are marvellous footballers who greatly resemble our style here at Barcelona. Pellegrini is a fabulous coach who wants to play football in the right way by developing the play from the back, through midfield and up front.

They’re very quick and, above all else, they’ve got goals in them. They’re scoring nearly four or five every game! It will be quite a spectacle because to beat City you have to attack them.

Will it be easier playing them because Aguero, Navas, Negredo have played in La Liga and Yaya Toure is a former team-mate?

Possibly, but the fact is they’ve got immense talent. It doesn’t really matter that you know them; everyone in the world knows who Lionel Messi is, but how do you stop him? It’s almost impossible. It’s exactly the same with Navas, Negredo and Aguero if he was fit. You know they’re quick and talented, but it’s difficult to stop them. The truth is it will be a very difficult game because they’ve got a great team.

How are you going to stop your ex team-mate Toure?

It will be very difficult, but we must be compact in midfield and defence. We like to pressurise the ball, but Yaya has a lot of talent, he makes assists, physically he’s a monster, so it will be difficult. He’s a great player, but also a great person. We have great memories of him. He played a little bit further back here, at City he plays further forward. He’s extraordinary. I haven’t spoken to him since the draw because I don’t have a number for him, but it will great to see him.

El Mundo Deportivo said on the morning of the draw that City were the team to avoid. Do you agree?

Maybe, but in a draw you can never predict these things. They’re an extraordinary team playing at a top level.

Which other Premier League teams have impressed you this season?

Arsenal are very strong. Manchester United aren’t quite at their best level, but Mourinho’s Chelsea have looked good. They’re very strong, physically, and defensively very compact, which makes it difficult to play passes between their lines. The Premier League has four or five teams this season that are really top drawer.

Xavi wears the Adidas Samba Collection Predator, the boot that challenges players to ‘Hunt or be Hunted’. Follow @adidasfootball on Twitter: #allin or nothing