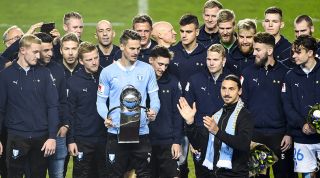 Former Sweden international Ibrahimovic, who scored 18 goals in 47 appearances for Malmo between 1999 and 2001 as a teenager, was welcomed by a standing ovation inside the Swedbank Stadion on Sunday.

The 36-year-old has been sidelined with a cruciate ligament injury picked up in late April, but didn't appear too fussed by his continued absence as he returned to his former stamping ground.

Swedish football federation chief Karl-Erik Nilsson was supposed to present Malmo skipper Markus Rosenberg with the Allsvenskan title, but instead Ibrahimovic beckoned the ex-West Brom striker to the podium and handed over the trophy himself.

"Of course it's special to receive the trophy from him," Rosenberg said post-match. "He's an icon for the club and Swedish football."

Malmo lost 2-1 to BK Hacken, but had already wrapped up the league title with 64 points from 30 matches – seven clear of second-placed AIK.