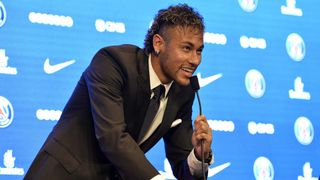 Transfer spending in Europe scaled record levels of almost €5.6billion during the close-season window in 2017, according to a new UEFA report.

The likes of Neymar, Ousmane Dembele and Romelu Lukaku stole the headlines with their blockbusting moves to Paris Saint-Germain, Barcelona and Manchester United respectively, and the European Club Footballing Landscape study reveals 80 per cent of global transfer spending took place in the continent's "big five" leagues.

With Neymar's world-record €222million switch from Camp Nou to Parc des Princes leading the way, last year saw six of the top 20 transfer fees of all time, with 10 reported transfers in excess of €50m – twice as many as in the 2016 window.

The Premier League was both the biggest spender and biggest earner of the window, with an outlay of €1.7bn and €911m recouped. This amounted to the worst net spend figure of -€772m in Europe.

PSG's lavish overhaul saw a reported growth of 331 per cent in Ligue 1 spending compared to 2016 and the capital club's €418 paid overall was the most across the continent.

Manchester City, having bought the likes of Ederson, Kyle Walker, Benjamin Mendy and Bernardo Silva, were up next on €249m and are the biggest spenders over the past five years.

Mendy and Silva were among those to leave reigning Ligue 1 champions Monaco, with Kylian Mbappe sensationally joining PSG, and this activity helped them to record staggering transfer earnings of €358m and a positive net spend of €256m.

Barcelona, flushed with their Neymar bounty, were the only club in the top 10 to balance their transfer activity.

Spanish and European champions Real Madrid did not feature in the top 10 spenders for the second consecutive year – something Zinedine Zidane might regret as his stars languish this season.