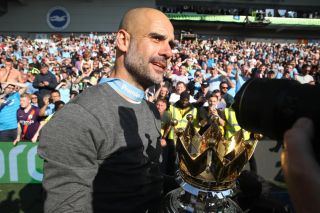 Manchester City have dominated English football over the past two seasons and, after winning the Premier League on Sunday, are now on course for a domestic treble.

A 4-1 win at Brighton saw them edge Liverpool to the title by a single point ahead of next weekend’s FA Cup final against Watford.

Here, Press Association Sport takes a look at the reasons behind their success.

The influence of Pep Guardiola

The impetus for City’s latest wave of success has undoubtedly come from their inspirational manager. City courted Guardiola for years before finally landing him in 2016 and it is now clear to see why they coveted him so much. After an unspectacular first season, Guardiola brought in players suited to his total football philosophy and spurred others to greater heights. He is intense, meticulous and his demands are high, but with 198 points over two seasons and the chance next week to win a fifth major piece of domestic silverware out of the last six available, the rewards are great. Such is their dominance that the next best points tally over the past two seasons is Liverpool with 172, while Tottenham (148) and Manchester United (147) are even more distant. City have won 64 games in the two campaigns, losing just six, scoring 201 goals and conceding only 50. Next best Liverpool have scored 173 and conceded 60.

Guardiola may have taken City to greatness, but he has been well backed by a club that has been transformed beyond all recognition in the past decade. The money he needed has been available, with more than £200million spent on a squad revamp in 2017. The club even spent £60million last summer on a player, Riyad Mahrez, who has not been a regular in the side. Yet the lavish spending since Sheikh Mansour took over in 2008 has not just been on the first team. The whole infrastructure has been overhauled and upgraded, with the stadium expanded and a world-class academy built. Their commercial operation is a huge success. They may not be regarded among the biggest clubs yet, but they certainly have the resources to match them all.

Players rising to the challenge

Bringing in Guardiola is not an instant guarantee of success. Players have needed to respond. Last season Kevin De Bruyne did so magnificently, proving almost unstoppable as City clocked up a record 100 points. This season, Raheem Sterling and Bernardo Silva have stepped up to another level. There are so few weaknesses in the team.

Another notable player to have excelled under Guardiola is Sergio Aguero. The Argentinian did not seem an obvious fit for Guardiola’s team at first despite his prolific record, but he has adapted and become an even better player. His 32 goals this season take his record City tally to 231. There has been less reliance in this campaign on two other experienced campaigners – Vincent Kompany and David Silva – as the squad evolves, but they remain key members of it.

Who can stop them?

This is a huge challenge for the rest of the Premier League. Liverpool are obviously the best placed to challenge after running them so close this term, finishing just a point behind, but it remains to be seen whether Jurgen Klopp’s men can go again. Tottenham did derail them in the Champions League, but Spurs’ consistency over the season was lacking. The rest have a lot of ground to make up and it seems unlikely they can close that gap in the near future.