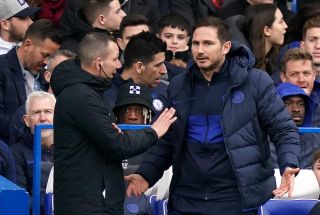 It was yet another weekend of VAR controversy as the Premier League returned to a full round of action after the staggered mid-season break.

The controversial technology found itself front and centre again as questions were raised once more over its consistency.

Here, the PA news agency takes a look at what we learned from the latest round of top-flight matches.

After consulting the VAR, referee Mike Dean has overturned the goal because there was a handball by Adam Smith in the build-up.— Premier League (@premierleague) February 22, 2020

VAR seems to be getting worse before it gets better, with Saturday arguably its most controversial day yet. David Coote was the man in the firing line after sitting in the hot seat for two matches on the day. First Professional Game Match Officials Limited was forced to issued a statement – while the match was ongoing – admitting he should have advised Michael Oliver to send off Tottenham’s Giovani Lo Celso for his challenge on Chelsea’s Cesar Azpilicueta. Then Leicester boss Brendan Rodgers was left bemused as he did not intervene when Kevin De Bruyne clearly handled James Maddison’s free-kick in the first-half, but did step in to award Manchester City a penalty on the hour when Ilkay Gundogan’s shot struck the elbow of Dennis Praet – highlighting inconsistencies still inherent in the system. In between times, Bournemouth were denied what appeared a perfectly good goal from Joshua King for a ‘handball’ which actually struck Philip Billing’s shoulder, then saw what they thought was a Harry Wilson equaliser disallowed and Burnley awarded a penalty instead for an incident in the build-up. Officials had hoped that the clear issues with the system would work themselves out as the season moved on, but with 11 games to go in the Premier League, the controversy is only growing.

Manchester United badly needed a spark in midfield, and seem to have found it in Bruno Fernandes. Sunday’s 3-0 win over Watford saw the Portugal international get off the mark with a first-half penalty, but it was his overall play that caught the eye as he finished as man of the match yet again – having now claimed the honour in all three of his starts for United. Ole Gunnar Solskjaer drew comparisons with the great Paul Scholes after the match, and said the £47million fee, which may yet rise to £67.7million, is a bargain in the modern game. If he can keep them in the hunt for a top-four finish, it will be hard to argue.

Could Burnley be returning to Europe?

Put all the VAR controversy to one side and the big thing to take away from the Clarets’ 3-0 win over Bournemouth is their continuing march up the Premier League standings. Not too many months ago there was concern about a battle against relegation, but Saturday’s victory made it four wins out of five for Sean Dyche’s men, who now sit only four points off United in fifth and seven from Chelsea in fourth. The Europa League places are within touching distance, and if Manchester City’s European ban is upheld, they could yet be dreaming of the Champions League.

Arsenal had to fight for victory over Everton after falling behind just 49 seconds in, but the 3-2 victory gave them back-to-back league victories for the first time since the very start of the season and provided further evidence the Mikel Arteta is stamping his authority on the side. The defensive strength shown of late was perhaps missing, but on the back of a superb performance of Pierre-Emerick Aubameyang – who scored twice and put in a shift defensively too – they extended their unbeaten start to 2020 and strengthened their own hopes of Europe.

Newcastle may still be seven points above the bottom three, but after Saturday’s 1-0 loss to Crystal Palace, the difficulty Steve Bruce’s side are in cannot be ignored. They have not scored in three Premier League games – not least due to their £40million frontman Joelinton having not found the net in the league since August – and rank dead last in the league in both possession and shots taken. Bruce needs to shake things up, and knows it. “The big Achilles heel is there and blatantly obvious,” he said of his side’s lack of cutting edge. “Maybe it is time for a change.”