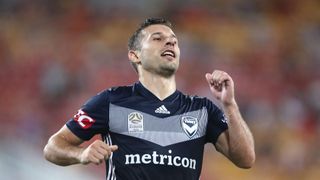 Kosta Barbarouses snatched a point for Melbourne Victory two minutes from time as they played out a 3-3 A-League draw at home to Wellington Phoenix.

Roy Krishna extended a phenomenal run of braces to three consecutive matches – the Fiji international winning and converting a penalty before snaffling the rebound when Lawrence Thomas saved from Williams to make it 3-1 before the half hour.

James Troisi exchanged passes with Toivonen to finish coolly in the 56th minute and, after sustained pressure, Barbarouses pounced from close range against his former club – following up a midweek hat-trick against Brisbane Roar for his eighth A-League goal of the season.

Victory are three points behind leaders Perth Glory having played a game more, while Wellington are fifth having extended their unbeaten run to nine matches.

Central Coast Mariners followed up their first win of the season against Melbourne City last time out with a 1-1 draw versus fellow strugglers Brisbane Roar.

Matty Millar prodded home his first goal in Australia's top flight in the third minute but Luke DeVere headed in an equaliser in first-half stoppage time.

Brisbane and Central Coast remain in the bottom two positions, on eight and six points respectively, although the Mariners have a game in hand on the team above them.