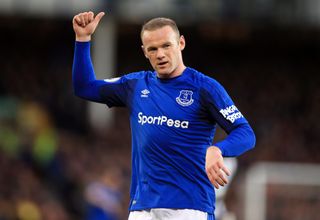 Gareth Bale and Theo Walcott made surprise returns to their former clubs on loan during the Premier League transfer window.

Bale completed a switch to Tottenham from Real Madrid last month, seven years after he left Spurs, while Walcott, who started out at Southampton before he departed in 2006, is back with the south coast outfit.

Here, the PA news agency takes a look at some other players who have made the move back to their old stomping ground in the Premier League.

Geordie Carroll made a return to St James’ Park last year after an injury-hit few seasons with West Ham. The forward was a hugely popular figure at Newcastle after he progressed through the academy and fired them to promotion in 2010. He left six months later and although he is yet to get off the mark in his second spell, he has become a useful option up front.

After he departed Goodison Park as a superstar teenager in 2004, Rooney was back 13 years later having achieved virtually all he could in the game with Manchester United and England. It was a mixed spell with his boyhood team. A hat-trick against West Ham was a high, but he moved on following a solitary season despite hitting double figures.

The Brazilian defender won the Champions League, FA Cup and Europa League in his first spell at Chelsea and after he made a surprise deadline day return in August 2016, added another handful of trophies to his list. He was a key player in the Premier League triumph under Antonio Conte and starred in another Europa League win before he left again in 2019.

United parted with £89million to bring academy graduate Pogba back to Old Trafford. After becoming frustrated with a lack of game time, he left in 2012 and returned four years later as one of the world’s best midfielders. He helped win two trophies in his first season but injuries and a lack of consistency has blighted his second spell.

The winger made a permanent return to Selhurst Park in February 2015 after a loan spell from Manchester United. Despite constant speculation over his future, the Crystal Palace ace has been a key figure in the Eagles’ fight against relegation in recent seasons and recently made his 350th appearance for the club.

Not content with the 11 trophies he won in his first spell with Chelsea, the Ivory Coast forward was back in west London two years after his departure. He lasted only one season under Jose Mourinho in 2014, but won another Premier League title and added seven more goals in all competitions.

Arsenal’s record goalscorer came back for a month-long loan in January 2012 and his second debut confirmed it was the correct decision. Summoned off the bench, Henry grabbed the winner in an FA Cup tie against Leeds at the Emirates. He scored once more, a last-minute goal to clinch all three points at Sunderland, before he headed back to New York Red Bulls.