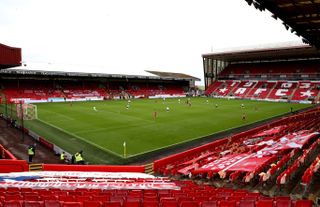 The eight self-isolating Aberdeen players have apologised to Derek McInnes and the Dons support for the “error of judgement” which led to Saturday’s clash with St Johnstone being postponed.

Aberdeen was later placed in a fresh lockdown after an outbreak of Covid-19 cases linked to a number of bars emerged.

But a “furious” First Minister Nicola Sturgeon also ordered the Reds’ trip to Perth to be postponed as she accused the Dons players of ignoring protocols agreed with the football authorities before the return to action was given the green light.

Now the players have released a statement apologising for their actions.

The group of players have asked us to issue this statement on their behalf pic.twitter.com/uodV9RK9lI— Aberdeen FC (@AberdeenFC) August 8, 2020

It read: “First and foremost we would like to apologise to every AFC fan, the manager, everyone at the club, the football authorities, the First Minister, all healthcare workers along with everyone else that has worked tirelessly around the clock to get the country, and in particular football, back up and running again.

“We, as a small group of players, made a huge error of judgement last weekend by thinking it was ok to visit a city centre venue together.

“None of us could have foreseen the escalation of Covid-19 cases in the Grampian area, nor did we deliberately attempt to flaunt or disobey government guidelines which we all must adhere to, or indeed the clear guidelines set out by the club.

“This was by no means a team night out as has been portrayed and while we attempted to comply with Government social distancing guidelines, we now recognise that our group of eight exceeded the number of households permitted to meet up.

“This was a genuine error on our part as professional football players, and in doing so, we have let our manager down.

“As players we appreciate our club has gone above and beyond to put protocols in place to protect us and it was never our intention to put that those jeopardy, or to put our team-mates or football staff at risk.

“As a player group, we once again apologise unreservedly to the fans, the manager, the board and all the staff at the club.”

Meanwhile, Motherwell say they are taking no chances with one of their players after he returned a false positive test.

The Steelmen said in a statement: “We can confirm that a first team player tested positive for Covid-19 earlier this week, as part of our regular testing procedures.

“However following two further tests – one through the NHS and another through our private testing facility – he has returned negative results. The player has not shown any symptoms at any point.

“Despite this ‘false positive’, the player will be in self-isolation for 10 days as a precaution. He will be tested again prior to his return to training.”