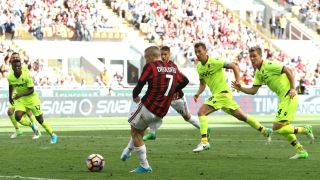 AC Milan beat Bologna 3-0 at San Siro on Sunday to clinch sixth place in Serie A and Europa League football for next season.

Goals from Gerard Deulofeu, Keisuke Honda and Gianluca Lapadula secured victory for Milan, who are back in Europe after spending this season without continental commitments.

Vincenzo Montella insisted ahead of the match that Europa League qualification was Milan's main goal this term and the team celebrated joyously at the final whistle, hoisting their coach in the air in a scene usually reserved for title winners.

The Rossoneri were in charge right from the off, but initially struggled somewhat going forward as Lapadula wasted a number of chances.

It eventually mattered little, though, as Deulofeu and Honda made the difference after the break, before Lapadula bundled home in stoppage time after 90 minutes of toil.

The striker was never far away from the action, but it had not looked like being his day for large parts and he ought to have opened the scoring when the ball somewhat fortunately fell to his feet after an attack involving Deulofeu and Carlos Bacca, but the Italian attacker somehow fired wide from 10 yards out.

Lapadula continued to cause the Bologna trouble with clever runs in behind and he got another chance to break the deadlock at the half-hour mark, blasting a shot over the crossbar after being set up by Leonel Vangioni.

The home side remained well on top after the break and Alessio Romagnoli was next to try his luck as Milan went in search of the opener, firing a powerful shot high and wide.

Montella introduced Honda for Bacca in an attempt to add some more creativity to his midfield and the Japan international nearly rewarded his coach, forcing goalkeeper Antonio Mirante into a low save.

Lapadula thought he had handed Milan the lead at last when he poked a shot past Mirante in the 67th minute, but the striker rightly saw his goal disallowed for offside.

Milan would go a goal up after all in the 69th minute, though, as Deulofeu found the net with a superb finish, guiding a half-volley into the net after a clever ball over the top from Fernandez.

The home side did not give their opponents any time to recover and Honda made it two just minutes later, curling a fantastic free kick past Mirante.

An Lapadula had the final say well into additional time, slamming home from close range to begin the party at a sparsely populated San Siro.