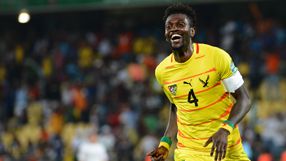 Togo will be seeking yet another inspirational performance from the tall forward as they need only draw the game to ensure they progress for the first time in eight attempts. Tunisia, beaten 3-0 by the Ivory Coast in their last game, must win to take second place in Group D.

Ivory Coast have already secured top place and their match against Algeria in Rustenburg is a dead rubber, an ironic turn of events given that before the tournament it was a much anticipated clash between the two top-ranked sides on the continent.

Algeria were eliminated after losing their opening two group games.

Adebayor has been a talismanic figure for Togo over the past eight years, helping the small west African country exceed expectations including a surprise qualification for the 2006 World Cup.

Togo have never got past the group phase of the Nations Cup but after beating Algeria 2-0 in their last match they are now one point away.

Adebayor almost missed the tournament in the latest of a long-running series of disagreements with officials and had to be persuaded by the country's president Faure Gnassingbe to play just weeks before kick-off.

The match with Tunisia settles the last of the quarter-final places with the victor going through to meet Burkina Faso on Sunday.

Burkina Faso were surprise winners of Group C on Tuesday after holding defending champions Zambia to a goalless draw and knocking them out of the tournament. Nigeria finished second after two late penalties gave them victory over Ethiopia.