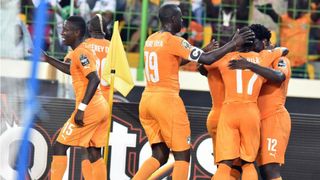 The Manchester City man scored either side of El Arabi Hillel Soudani's equaliser and Gervinho added a late third to send the 1992 African champions into the final four, where they will meet DR Congo.

Bony gave the Ivory Coast the lead midway through the first half with a well-taken header - the striker's second goal against Algeria in as many games - but Renard's side started the second half slowly and were made to pay when Soudani levelled in the 51st minute.

However, Bony again demonstrated his quality by powering a header past Rais M'Bolhi with 23 minutes remaining to knock the wind out of Algeria's sails.

And Gervinho steered home a third from 15 yards after Algeria had thrown men forward in search of an equaliser.

It was a deserved victory for the Ivory Coast over another of the pre-tournament favourites and Renard's side remain on course for a third final appearance in six editions of the tournament.

Yacine Brahimi and Soudani went close early on for Algeria, while Gervinho - returning after a suspension - failed to find a team-mate at the other end from a promising position down the right.

The Ivory Coast then began to apply pressure, Serge Aurier heading against the post before Bony opened the scoring shortly before the half-hour mark.

The former Swansea City man opened his account for this year’s competition as he got on the end of Max Gradel's delivery to nod home.

With Islam Slimani on the bench due to a knee injury, Christian Gourcuff’s men struggled to gain a foothold in the game before the break.

However, Soudani restored parity early in the second half as he made the most of sloppy Ivorian defending - heading on Sofiane Feghouli's long ball to Riyad Mahrez before finishing the move following a cross from the Leicester City man.

Brahimi - who shook off a back problem to feature - was denied by Sylvain Gbohouo at close range before Bony restored the Ivory Coast's lead with another fine finish.

Bony outmuscled Carl Medjani to meet club team-mate Yaya Toure's free-kick from the right with a powerful header that M'Bolhi was unable to keep out.

Slimani twice went close late on, but Gervinho scored in the final minute of stoppage time as the Ivory Coast saw out an impressive win that suggested they may finally live up to expectations at the continental showpiece.