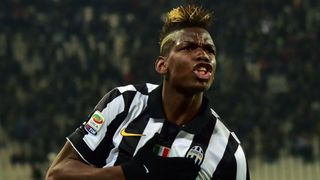 The France international has been linked with the likes of Manchester United, Chelsea and Paris Saint-Germain in recent weeks, despite agreeing a new five-year contract in Turin just six months ago.

Pogba, 22, is currently out injured with a hamstring problem but agent Mino Raiola says the calls continue to come in for one of Europe's best players.

"I must have received more than 2,000 phone calls for him since the beginning of the year," he told La Stampa.

"Almost 20 [calls] a day, at least a couple of which were to negotiate.

"With Juventus we signed for five years, but we're all gentlemen and if the right offer comes along for Pogba and for Juventus, then it will be done.

"The big challenge for Juventus will be to rebuild the team. You have to change when you are strong, not when you have to.

"Next year they will need four or five players. Remember what happened when [Zinedine] Zidane left."