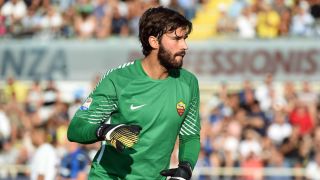 Brazil goalkeeper Alisson publicly thanked Roma fans ahead of what is expected to be a world-record transfer to Liverpool.

The 25-year-old flew out of the Italian capital on Wednesday as he closes in on a widely anticipated move to Anfield for a reported £67million.

That would almost double the £35m that took Ederson from Benfica to Manchester City last year in what was then the highest fee ever paid, in sterling, for a goalkeeper.

Liverpool's eagerness to find a replacement for the much-maligned Loris Karius appears to have forced them into the big-money move, although reports suggest personal terms are yet to be agreed.

5 - kept the clean sheet in five of his six home games played in the 2017-18 Champions League for AS Roma, conceding goals in only one match, in May against Liverpool. Safety. July 17, 2018

However, Alisson seemed to confirm the impending switch when approached by reporters prior to boarding his flight in Rome.

"I want to say thanks to AS Roma fans," he said in response to questions over his future.

Alisson made 49 club appearances in all competitions last season as Roma reached the Champions League semi-finals, before losing out to Liverpool.

He took over between the posts at Stadio Olimpico following Wojciech Szczesny's departure to Juventus and went on to keep three clean sheets in five matches at the World Cup after being installed as Brazil's first-choice by Tite.