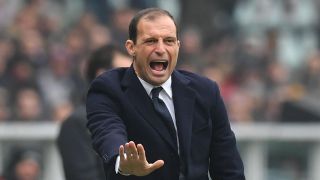 Massimiliano Allegri insisted Juventus can still get past Tottenham in the Champions League after they responded to a 2-2 draw with Spurs by winning the Derby della Mole 1-0 at Torino on Sunday.

The Scudetto holders gave up an early 2-0 lead and missed a penalty at home to Mauricio Pochettino's team in the round of 16 on Tuesday, and the Premier League side will have the advantage of two away goals in the return fixture at Wembley next month.

Disappointment at the result did not prevent Juve from keeping the pressure on Napoli in Serie A, though, Alex Sandro's 33rd-minute goal sealing all three points against their cross-city rivals at Stadio Olimpico Grande Torino.

"[We] made too many technical errors after going 2-0 up against Tottenham and they had more chances than we did, but we go to London convinced we can do it," Allegri told Mediaset Premium after the derby.

"Juve are a strong side with extraordinary players, so I am happy to train them. We're challenging on all three fronts, only got it wrong in four games and I don't consider the 2-2 with Tottenham to be a failure, nor a tragedy.

"I am proud of the lads and today we saw a good reaction, as we enjoyed ourselves even during difficult moments."

Paulo Dybala made his return from a hamstring injury off the bench in the second half against Torino, replacing Douglas Costa in the 66th minute, having not featured since a 1-0 win at Cagliari on January 6.

"Dybala did well for 30 minutes. Obviously he's lacking match fitness, but that will come," Allegri said.