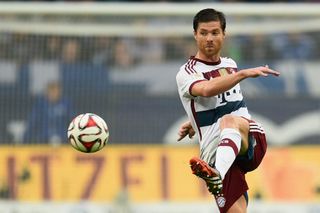 Alonso started in a match in the German top flight for the first time in his heralded career, playing 68 minutes as Bayern earned a 1-1 draw away at Schalke.

The former Liverpool and Real Madrid hero, 32, said his first taste of domestic football in Germany left him feeling comfortable in the thick of it, after only confirming his signing hours prior to the fixture at the Veltins-Arena.

"It feels good at the moment. I wanted to come here and to have a great experience," the Spaniard said, according to the Bundesliga's official website.

"I've enjoyed La Liga and the Premier League, but it's a big step for me now to come to the Bundesliga.

"The teams are great, the crowds are incredible and the speed of play suits me.

"So I think I'm going to have time to really enjoy this experience over the next couple of years."

Alonso said fatigue from travelling back-and-forth from Munich to Madrid in the build up to the weekend left him unable to run out the match.

"Well I had to be ready. I wasn't sure if I would be, but after Pep [Guardiola] told me before the game that I was going to be starting, I said 'OK I'm going to be ready'," he said.

"The last few days were quite tough, which is why I got a little tired and couldn't complete 90 minutes, which is normal.

"Now I have a week to train properly and be ready for the next encounter."

Alonso said he arrived in Munich permanently on Friday, and said Bayern should have increased the lead at Schalke before settling for a draw.

"I needed a proper rest because, as I said, I've been travelling a lot these last few days. But it wasn't a problem. I was going to be ready for today," said Alonso, after landing from Spain on Friday.

"I think the first 20 minutes were good for the team.

"We could have scored more goals, but at 1-0 the game is still up for grabs.

"Schalke pushed us quite hard and managed to score so credit to them as well."