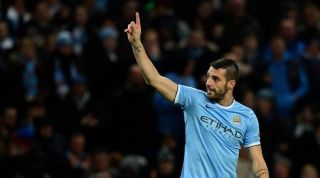 Negredo joined City from Sevilla in 2013 for a £20 million fee but lasted just one season under Manuel Pellegrini.

He scored a remarkable 23 goals by January despite having to compete for a starting spot with Sergio Aguero, Edin Dzeko and Stevan Jovetic.

But Negredo, who scored 10 goals in 21 appearances for Spain, found things considerably harder in the second-half of the season.

“After February I had a shoulder injury which made it difficult for me to play,” Negredo tells FourFourTwo in our February 2020 issue - a Euro 96 special out now.

“The manager used other strikers instead, but I still feel I made the right move going to City.

“Playing alongside Aguero, Silva and Yaya Toure made my job easier. I was playing for the best team in England, in the best league in the world.

"Manchester's a good city and we were happy there. It's a nice city for a footballer, one where you can live in peace - even though there's too much rain!"

City won their second Premier League title in 2013-14 as they overcame Brendan Rodgers’ Liverpool in a dramatic title race.

Negredo departed for Valencia soon after but did not always find things easy in his home country.

“I was in and out of the team,” he says. “I said some words about the tactics of our coach [Nuno Espirito Santo, now of Wolves].

“The situation at Valencia was difficult and the coaches changed three times in one year.”

Nuno was replaced at Mestalla by Gary Neville, and the Englishman’s time in Spain was short-lived.

But Negredo is defensive of Neville’s performance, despite the former Manchester United’s man’s catastrophic four month stint as manager.

“Gary Neville was my coach for a little while,” says Negredo, now 34. “I played more under him, but he was at the club in a bad time.

“Gary and his brother Phil were good people but it was a terrible time for everyone at Valencia.

“The first person to lose their job is the coach when the team are not winning.”

Read the full interview with Alvaro Negredo in the February 2020 issue of FourFourTwo magazine, out in shops and available digitally now. Our brilliant Euro 96 special includes a 27-page feature on the tournament, plus exclusive interviews with Darren Anderton, David Baddiel, Karel Poborsky, John Motson and Barry Davies, Pierluigi Casiraghi, Craig Burley and many more. We also find out the games that changed Cesar Azpilicueta's life, Juan Mata's Perfect XI, and why Peter Crouch got sick of the sight of Mickey Rourke.