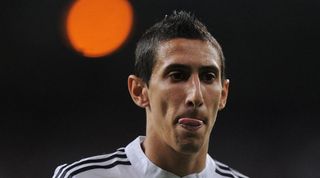 The Argentina international has been heavily linked with a switch to Old Trafford in recent weeks and was left out of the Real squad for Friday's Supercopa de Espana second leg against Atletico Madrid.

Paris Saint-Germain are also among Di Maria's potential suitors, but Financial Fair Play restrictions appear to have halted their plans to bring him to the French capital.

However, the 26-year-old's departure now appears to be imminent.

"Angel di Maria has said his goodbyes," Ancelotti is quoted as saying by Sport. "It's not official but the matter is resolved - it was his decision to leave."

World Cup winner Sami Khedira had also been linked with a move away from the Santiago Bernabeu, but Ancelotti has insisted the German is going nowhere - at least for the time being.

"He is happy here and he is staying," he added.

Arsenal had appeared to be among the frontrunners for Khedira's signature.