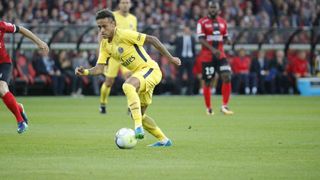 Neymar's Paris Saint-Germain career got off to a stunning start on Sunday as he scored one and created another in a 3-0 win at Guingamp.

The Brazil star stunned the footballing world when he completed a world-record €222million move from Barcelona earlier this month.

His transfer was not completed in time to feature in PSG's 2017-18 Ligue 1 opener against Amiens last weekend - where he was presented to the Parc des Princes crowd - but he made up for lost time in style at Stade de Roudourou.

With Unai Emery's side already leading 1-0 thanks to Jordan Ikoko's bizarre own goal, Neymar assisted Edinson Cavani with a wonderful pass before the roles were reversed eight minutes from time for the Brazilian to tap home.

And Neymar's fledgling Ligue 1 career already compares favourably to his spells in his homeland and with Barca, where it took him seven and six games respectively to net his first league goal.

He is also the first Brazilian to score on his Ligue 1 debut for PSG since Nene against Saint-Etienne seven years ago.