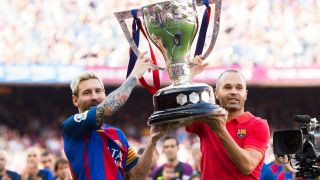 Andres Iniesta has joined J-League side Vissel Kobe but the Spain great leaves Barcelona with one of the most impressive individual records ever.

Iniesta won nine La Liga titles in 16 seasons after coming through the fabled La Masia academy, going on to captain the club in his last years at Camp Nou.

The midfielder went out on a high with a fourth domestic double, having scored in a 5-0 rout of Sevilla in the Copa del Rey final, helping to wrap up Barca's third combined league and cup success in the past four seasons.

Here, we take a look back at every season where the mercurial midfielder has finished on top of the pile.

Iniesta made his debut in 2002 but this was his breakthrough season as a regular first-teamer. Under Frank Rijkaard, he featured in 37 out of 38 La Liga games, although only 12 times as a starter. There were two goals, including the opener in a 2-1 triumph at Albacete, where Xavi scored a late winner.

Once again Iniesta was on the fringes at a Barcelona where Ronaldinho was king. Across 14 starts and a further 19 appearances as a substitute he failed to find the net but a famous knack for assists was starting to emerge. He laid on four La Liga goals and Rijkaard's men finished the season as Champions League winners, with Iniesta coming off the bench at half-time in a 2-1 win over Arsenal in Paris.

The season where everything changed for Barcelona as Iniesta and Xavi came to redefine midfield excellence in Pep Guardiola's magical team. The rookie coach and a blossoming Lionel Messi were major factors in the Blaugrana sweeping the board, capturing La Liga, the Copa del Rey and the Champions League. Iniesta netted an unforgettable last-gasp goal at Stamford Bridge to sink Chelsea in the semi-finals of the latter competition and weighed in with four more and eight assists in the league.

GAL MORNING!!!Where were you that night? It’s 8 years since the famous goal by at Stamford Bridge 6 May 2017

Jose Mourinho's Inter might have obdurately halted Barca in Europe but they continued unchecked in La Liga. Having nursed a thigh injury though the 2009 Champions League final against Manchester United, Iniesta struggled physically and emotionally at times during the subsequent campaign. He still contributed a goal and five assists across 20 La Liga starts and would enjoy a moment of ultimate triumph when he fired home the winner in Spain's 1-0 World Cup final victory over Netherlands in Johannesburg.

Scoring on the biggest stage of all is likely to give anyone a taste for goals and Iniesta, it seems, was no different. This proved to be his most prolific goalscoring campaign, with eight in 32 La Liga starts as Guardiola made it three titles out of three. Barcelona also regained the Champions League, with a 3-1 win over Manchester United at Wembley that stands as arguably the finest display by an incredible collective.

Mourinho and Real Madrid finally broke Barcelona's stranglehold in 2011-12 but their title defence proved a thankless task. Any struggles at the Santiago Bernabeu were generally magnified by the majestic Iniesta, whose 16 assists represented the best haul across Europe's top five leagues. He also chipped in with three goals for Tito Vilanova's side.

A rare campaign without a major honour under Gerardo Martino heralded Luis Enrique's return to Camp Nou as head coach. The change to a slightly more direct style that serviced the awesome attacking talents of Messi, Neymar and Luis Suarez was reflected in Iniesta's return. He managed a solitary assist in La Liga, although he collected the man-of-the-match award when Barca swept past Juventus in Berlin to win the Champions League and complete a treble season.

Luis Enrique's MSN Barca were untouchable domestically once more, although Atletico Madrid denied them another clean sweep by coming through an all-Spanish Champions League quarter-final. Iniesta's only La Liga goal of the season was one of his finest as he received Neymar's backheel and lashed into the top corner during a 4-0 thumping of Madrid at the Bernabeu.

Iniesta made a mere 13 starts during Luis Enrique's final season in charge but successor Ernesto Valverde had no intention of putting the great man out to pasture. "If I've played him it's not because I'm trying to convince him of anything," Valverde said of Iniesta. "It's because he's the right player to pick. I play a player because I think he's the best player for Barca."