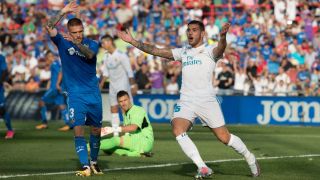 Real Madrid full-back Theo Hernandez is "annoyed" at his lack of involvement in the France setup and has opened the door to potentially representing Spain.

Theo has played for several of France's youth teams and has emerged as one of the world's best young players.

However, he is yet to be picked for their Under-21s or the senior side, despite enjoying a fine campaign at Deportivo Alaves last season and since going on to make a solid start to life at Real Madrid.

The 20-year-old's brother Lucas Hernandez has played for the Under-21s, but the chances of them playing together at international level are becoming slimmer, as Theo conceded he is getting frustrated with the situation and may opt to play for Spain.

"If France doesn't call me, we'll see," he is quoted as saying by Marca.

"I have not been called in August, nor in the September or October selections. I am French, but we will see. I am a little annoyed."