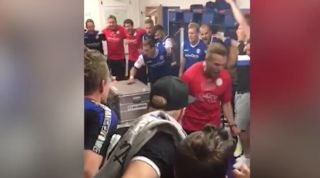 Bielefeld went into this penultimate match of the season 17th in the 18-team second tier, chasing victory against second-placed Eintracht Braunschweig.

Ignoring the mismatch, assistant coach Rump – who spent most of his career playing for Bielefeld – made sure his players wouldn't be going into battle without his words ringing in their ears. In a dramatic pre-match team-talk, he riled up his players in a frenzy that would have make Al Pacino in Any Given Sunday blush.

It certainly did the trick: Bielefeld provided one of the shock results of the season with a staggering 6-0 win.

(Translated video in tweet below this one. Everything sounds better in German, right?)

The best motivational speech of the season? We definitely think so!

It meant they moved up to 15th, two points above the automatic drop zone (though level on goal difference with play-off-bound 1860 Munich) with one game left to play. Wunderbar!