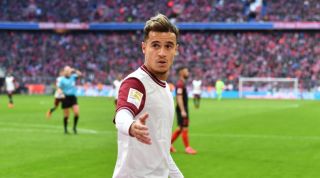 Philippe Coutinho will not be returning to Liverpool this summer after they made it clear they're not interested in re-signing the Barcelona midfielder.

According to the Mirror, both the Reds and Bayern Munich have said they do not want Coutinho. The Brazilian is currently on loan at Bayern.

Barca have told Coutinho that he will be allowed to leave the Camp Nou as soon as the transfer window reopens following the coronavirus pandemic.

However, they are still seeking £107m for a player they splashed out £142m on to sign him from Anfield in January 2018. It is that huge asking price for someone who will turn 28 in June that has primarily put Liverpool off.

That is a blow for Coutinho, who admits he made a mistake forcing a move to Barcelona a little over two years ago and had hoped he could make an emotional return to the club.

Yet the Premier League does still remain an option for the South American, with both Manchester United and Tottenham Hotspur considering moves.

Neither Arsenal or Chelsea would be willing to meet the current valuation for Coutinho, but Leicester City remain an intriguing outside prospect.

Their manager, Brendan Rodgers, was the man who originally brought the Brazil international to English football from Inter Milan in January 2013.

Leicester know they cannot compete financially with the likes of Man United, but are tempted by the prospect of trying to bring Coutinho to the King Power Stadium.

The best right-back in the world? How Trent Alexander-Arnold is reinventing the full-back