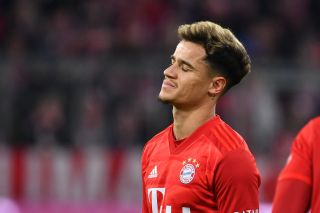 With a treble looking increasingly likely with every performance this season, it's understandable that Philippe Coutinho wants to focus on playing well for Bayern Munich right now.

But with reports in The Star suggesting a loan move to Arsenal next season could be in jeopardy due to Coutinho's reluctance to take his eye off the prize, perhaps the Brazilian should consider the upside to a move to the Emirates.

It's been difficult to watch the 28-year-old's drop in form and confidence since making his sensational switch to Barcelona in January 2018. At the time, it seemed a perfect match, with Barcelona needing a playmaker to take over the conducting duties from Andreas Iniesta and Coutinho desperate to play for the Catalan giants.

Coutinho was by no means terrible for Barca, but the weight of expectation, a tactical system that was never going to be built around his creative influence and a loss of form saw fans turn against him. A loan move to Bayern Munich last season was meant to offer some rehabilitation but a managerial change, combined with the improved form of Thomas Muller, saw him marginalised as the season progressed.

Coutinho scored eight goals in 23 league appearances for Bayern last season - a decent return given his injury problems in 2020 - and managed 21 in 76 matches during his two seasons in Barcelona. Trophies have also been won: two La Liga titles, a Copa Del Ray, one Bundesliga crown and a German Cup. Coutinho will know deep down, however, that he was never the star of either of those teams; not even a guaranteed starter.

With a return to Barcelona highly unlikely, a switch to Arsenal, even on a temporary basis, could be the perfect chance to get his career back on track.

Coutinho produced the best form of his career in the Premier League. At Liverpool, where he was the creative fulcrum of a fast, physical side, he scored 41 goals and set-up 37 in just over 150 appearances. In the final season and a half in England, when he had matured into one of the most exciting players in the league, he scored 20 goals in 45 appearances, laying-on another 13; phenomenal numbers for a No.10.

Arsenal are crying out for some creativity in midfield, with Mesut Ozil out of favour and Danny Ceballos not convincing enough to make his loan from Real Madrid a permanent transfer. Coutinho would be given the status and backing he never truly had at either Barcelona or Bayern Munich, while the style of football played by Mikel Arteta's side would also suit his skillset; counter-attacking football and quick transitions, instead of the complete domination Bayern and Barcelona enjoy most weeks domestically.

Coutinho is still a world class playmaker, but appears to have lost that bit of swagger that made him such a pleasure to watch at Liverpool. The ease with which he once controlled games hasn't vanished, but appears diminished. A move to Arsenal might help him rediscover his genius.