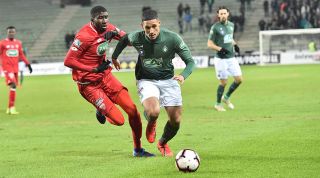 Arsenal are clearly targeting their defence for improvement this transfer window, and are closing in on Saint-Etienne's highly rated centre-back William Saliba.

But the deal comes with a catch.

According to ESPN, Arsenal will pay €25m for the 18-year-old, but are willing to send him back on loan to Saint-Etienne for the season in order to further his development.

Saint-Etienne did a similar deal with Chelsea when they sold Kurt Zouma in 2014, and more recently we saw Liverpool allow Naby Keita to spend an extra season at RB Leipzig before moving to Anfield.

Given Arsenal's need for a centre-back immediately, with concerns about Laurent Koscielny's fitness and Shkodran Mustafi's form, it's unclear whether Saliba would be their only central defensive signing of the summer.

If he is, it seems like a tacit endorsement of Arsenal's current young centre-backs Rob Holding and Konstantinos Mavrapanos.

After signing Matteo Guendouzi – one of the brighter points of a difficult season – last summer, Unai Emery will be hoping Saliba can make just as much of an impact in time.

The 11 most memorable transfer swaps...and which club got the better deal