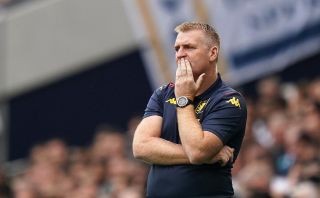 Aston Villa boss Dean Smith has warned his side that individual mistakes are harming their fight for Premier League survival.

Villa, who have conceded more goals than any team in the division with 50 in 26 matches, suffered a heartbreaking home defeat last weekend against Tottenham, who won 3-2 thanks to an injury-time strike by Son Heung-min following a defensive error by Bjorn Engels.

The result left Villa just one point and one place above the relegation zone and ahead of Saturday’s trip to Southampton, Smith has called for a renewed focus on eradicating errors.

“The fact remains our personnel has made too many errors. We have made individual mistakes a hell of a lot,” said Smith at his pre-match press conference broadcast on the club’s website.

“We know what we have to get better at. Unfortunately, we’ve made a lot of errors that have led to goals and we’ve been punished by mistakes.

“You get punished at this level. That is what the players have been learning and focusing on in training. We have a very attack-minded group and we have been working with them to be more responsible without the ball.

“Our focus and concentration has got better as the season has gone on, but it needs to improve for the last 12 games, all of which will be cup finals for us.”

Speaking of cup finals, the trip to Southampton is Villa’s final league game before they face Manchester City in the Carabao Cup final at Wembley on March 1.

Smith insists the showpiece looming on the horizon will not provide a distraction.

“I would suggest if these players are serious in their careers, then they want to be Premier League players. That means every game is a cup final for them,” said the Villa boss.

“Win this cup final to be in the next one. It’s no distraction – it’s no bigger than Southampton and at the moment Southampton is our only attention.”

Villa will be boosted by the return of Tyrone Mings on Saturday at St Mary’s. The defender missed the Tottenham defeat with tonsillitis but he resumed on Wednesday and he is expected to be restored to the starting line up by Smith.